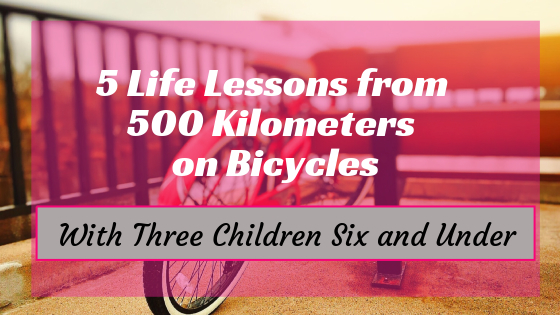 After all, people all over the world live without the luxuries and routines to which we have become accustomed, and their children seem to fare just fine (as do the parents).

So, despite negativity from some, we packed up our things and set off on the road. It was a wonderful adventure, and we learned a great deal.

Here are five life lessons learned from 557 Kilometers on bicycles (with three children six and under).

1. You’re stronger than you think.

Before setting out on this trip, I hadn’t ridden my bike for any length of time for about 2 years (since baby #3 was born). The longest ride I had done  in that time period was about 20 minutes.

Many people are surprised to hear that, and others may even think that going on this trip without prior training was a dumb move. People assume that to go on an active trip like this, you need to be in tip top shape. But the truth is, this is just an excuse not to embrace the unknown.

There’s never a right time to go on a big adventure; you just have to jump in and do it. Should you train for a trip like this? Maybe. But just going works too. The trip itself can become your training. At that point, your mental toughness becomes more important than your physical strength.

On this trip, I found out I was stronger than I thought, both physically and emotionally. Sure, I hadn’t ridden in a while, but I had done sprint triathlons in the past, and your muscles remember that strength pretty well – just like, well, riding a bike.

Don’t wait to be ready for an adventure. Just go with it and enjoy the ride. You’re stronger than you think, and you need very little to make your dreams happen.

2. You need a lot less than you think you do.

On a trip on bicycles, you carry everything with you wherever you go; therefore, you have to pack mindfully. Not having the luxury to bring a lot of stuff with you makes you realize how much stuff you have that you don’t actually need.

When my husband got home, one of the first things he said when he opened his closet was: “I have too many clothes. I don’t need all of this.” Surviving just fine on three pairs of bottoms and three tops makes you realize that you have a lot more than what you actually need.

This trip has taught us to be more mindful about conservation, purging, and donating things to people who are in greater need than we are. Having fewer things also gives us time to appreciate all the beauty around us.

3. Sometimes you need to leave home to appreciate its beauty.

I had an epiphany during this trip. I was riding along the waterfront trail near Toronto, Ontario, when I thought to myself: “I bet there’s a tonne of people who live here who never take the time to appreciate the gorgeous lake.” And then it dawned on me that I live in Kingston, ON, a waterfront town, and I almost never take a walk or ride my bicycle along our own waterfront path.

I made a mental note to myself to enjoy the small amount of summertime we get here, and get to the lake more frequently. I now see my beautiful town for what it is, and although the travel bug bite hasn’t faded yet, I now appreciate my town that much more.

The beauty all around me isn’t just in the natural world, but also in people’s behavior and the kindness of generous strangers.

4. Most people are generous when you give them the opportunity.

Whereas many people avoid strangers and teach their children to do the same, I believe that a healthier way of looking at life is being kind to strangers, and opening up the opportunity for them to do the same.

A fellow cyclist with whom we stayed overnight in Hamilton said this to me, and it really stuck: “most people are generous when you give them the opportunity.” It is a quote that will forever stay with me.

During our trip, we were blown away by the kindness of strangers – from giving us water when we ran out, to opening up their homes overnight for a family of 5, to giving us rides when we needed to pick up more gear, we were truly amazed by how much people are willing to give.

But if we had been afraid of “dangerous strangers,” none of this might ever have happened, and we might have a skewed view of danger in the world. In truth, the world is a lot less dangerous than most people make it out to be.

5. When it comes to danger, nobody knows what they’re talking about.

A lot of people were concerned when we said we took three children 6 and under on a 557-kilometer bike trip. They were afraid we’d get hit by a car, or get into an accident of some kind. Yet, these same people take their own children in car rides several times per week (and sometimes several times per day). When an activity become ubiquitous, it is easy to forget the inherent danger in it. Car accidents are the number 1 cause of accidental death for children 6 and under, yet very few fatal bicycle accidents are reported for that age group. But people are used to riding in cars, so the danger is forgotten. Most people aren’t used to taking children on long bike rides, so they view it as more dangerous.

Many people who had never ridden a bicycle  through Toronto, Ontario, warned us against it – “you don’t want to be in Toronto traffic.” This feeling was so strong among some, that we almost decided to take public transit across Toronto. In the end, we decided to go through with riding, and we found not only bike lanes, but a separate sidewalk for cyclists, plus gorgeous bike paths going all the way through the city.

People are afraid of what they don’t know. When something is unfamiliar, it is easier to distance oneself from it than to truly appreciate the benefits.

So when you want to do something, but people warn you about how dangerous it is, go with your gut rather than with scare tactics. Embrace your dreams, make them into goals, and set off on the adventure you’ve always wanted to take.

You’ll learn some amazing lessons and you’ll be glad that you let your heart speak louder.

Want to hear more about our experience? Check out my interview on the awesome Family Adventure Podcast.