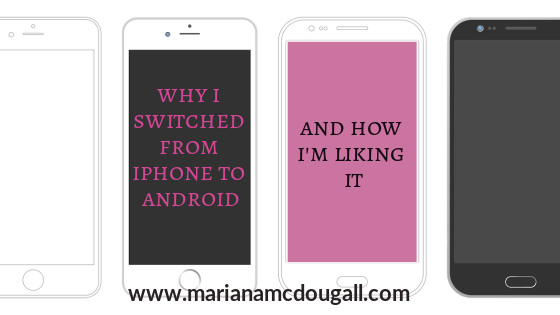 What kind of smartphone do you own? Are you a loyal iPhone follower, or are you a Google fan? I’ve recently switched from iPhone to Android, and wanted to share my experience.

It helps to know that I’m not overly tech-oriented and that I was the last one of my group of friends to ditch a flip phone for a smartphone—and the only reason I made the switch is that my 5-year-old flip phone was pretty much dead.

Plus, a wonderful person sold his old iPhone to my husband for $50. This was an iPhone 4, and I got it in 2013 as a gift from my husband. That phone died long ago, but I have kept it as a memory of the friend who sold it to my husband (read more about my grief about his passing here).

After the iPhone 4 died, I bought a used iPhone 5. And that’s all the iPhoens I’ve ever had, because a brand new iPhone was never a priority in my budget. My iPhone 5 had been slowly dying since the beginning of 2017. Siri no longer worked, the screen randomly went blank, it wouldn’t notify me of messages, and although I didn’t have it on silent or do not disturb mode, anyone who called would get sent straight to voicemail. Which is to say, I needed a new phone, particularly since I use it for work.

I needed to upgrade my plan from the month-to-month agreement I’d had with Telus since 2003, since that plan didn’t include any long distance or data. As my writing and editing business grew and as my family travels all over Canada and the US in our RV (stay tuned for details!) long-distance and data became essentials. So, if I was going to get a new plan, I might as well get a new phone that actually works along with it.

To make a long story (and three very long phone calls) short, I was able to get a Samsung S8 for no money down with the plan I signed: a 2-year contract that includes unlimited US and Canada calling/roaming and text, 5G of data, and all the regular stuff (voicemail, call display, etc.) The monthly charge isn’t cheap, but I’m getting lots, and I like knowing exactly how much I’ll pay each month—no surprise overage charges.

Getting a “free” phone was pretty much the deciding factor in switching to Android. The least expensive way to get an iPhone (even an older one) still required about $200 down, so I decided I’m better off getting a “free” phone. I’ve never been overly attached to Apple anyway. So I signed on the dotted line for the zero money down Samsung 8, and I don’t regret it.

I’m loving the Samsung phone. It’s got great features, a nice big screen, and I love that Google will only respond to my voice. The camera on this thing is absolutely insane. The pictures are ultra clear and it’s hard to believe I’m not using a “real” camera. We own an “older” canon (purchased in 2009), and the camera on my phone takes better pictures than the Canon (except at night).

I’m also really impressed with the data transfer process from the iPhone to the Samsung S8; I was able to retain pretty much everything I had on the old phone.

I am also so thankful that using Google Drive and all the Google suite products is super easy on the Samsung. I do all my work in Google drive, so having easy access on my phone is not just convenient, but essential.

Since I could never fit a new iPhone into my budget, I only had older iPhones, and older iPhones and Google don’t play nice. The Google calendar never synced, and it was really hard to access my documents. So it’s plain to see that I’m happier to have gone Android.

My personal opinion (and keep in mind I’m not a tech person) is that Android has caught up to iPhone, and currently, when we purchase an iPhone for an astronomical price, we’re really just paying for a brand name. Sure enough, iPhone technology is amazing, but about the only thing the iPhone did that Android didn’t is FaceTime, and now with Google Duo, I’m pretty sure the rivaling companies are pretty much on par in terms of what these phones can do.

Personally, I think I’ll stick with Android from now on (especially since I got the phone for no money down with my contract, and it’s a great phone).

What’s your preference? iPhone or Android?