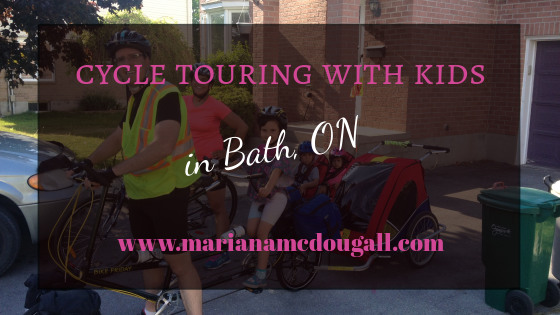 As most of you know by now, me, my husband, and our three children (ages 6 and under) set off on a cycling adventure on May 28th, 2016. We decided to see how far we would get, with a possible lofty goal of getting to London eventually. The reason doing a trip like this never stressed me out of overwhelmed me is that I looked at it as a 30 kilometer outing. Then the next day, I looked at it as another 30 kilometer outing, and so forth.

It’s now been 17 days since we set off, and we’ve cycled about 375 kilometers. We have seen some wonderful sights, learned some great lessons, and met some amazing people. I’ll be writing a post later on about all the lessons learned, but for today, I thought it was about time I wrote a little bit about the places we have visited thus far.

The first day of our trip actually happened a day before it was supposed to happen. We were going to leave on Sunday, May 29th, but we packed all our things on the 28th, and by the time we were done, it was 6:00 p.m. Since these days it’s not getting dark until close to 9:00 p.m., we thought, why not just leave now and go to Bath? It’s not that far (about 14 kilometers), and we have a backyard for camping there (a friend’s house).

Our neighbour, Chris, helped us a great deal in getting the bikes ready, and we’re very thankful to him for that. We’re also thankful to him for watching over the house and even cutting our grass when we’re home but a bit too busy with the kids. We have awesome neighbours.

So after getting all our stuff packed, we set off. We arrived at Paul’s house and started setting up camp. We were able to use the washroom in the house to get ourselves all ready for bed. Setting up camp didn’t take too long and the kids enjoyed Mr. Paul’s beautiful backyard.

The next morning (Sunday, May 29th), we left for Picton. Paul hooked us up with some great tea, coffee and extra granola bars, and off we went.

On a cycle tour with kids, it’s really important to remember that it can’t be about how many kilometers you get under your wheels in a day; it has to be about the journey itself. So if you see something the kids might enjoy experiencing, stop and enjoy it. And that is how we have done this whole trip. Whereas most cycle tourists we’ve met do upwards of 100 kilometers a day, our longest day so far was just under 60 kilometers, with the average being about 40 per day. We also take long breaks at playgrounds and the like. I think the longest we’ve biked without a break was about 2 hours. Cycling from Bath to Picton was no different.

On our way out of Bath, we stopped at a cute little market across from a pirate playground. The kids had lots of fun playing and checking out the market as well. I met a lovely potter named “Ann,” who was really interested in our adventure. She also had a friendly dog, so the kids enjoyed playing with him.

There was a booth that had handmade knitted items, including these incredibly intricate miniature finger puppets. The lady who makes them uses the money for some volunteering work she does in Peru. These things were tiny, and they were $5 for 3 of them, so we thought, “why not?” The kids were only allowed 1 toy each on the trip, but since these were so small, we didn’t think it would be a big deal to add them to the stuff we were already carrying. The kids were ecstatic. We bought a spiderman, a bunny eating a carrot, and an alpaca (with a halter on – I told you these things were intricate!)

At the park/playground, we saw two guys with bikes that looked the part of cycle tourists. Dan started talking to them and we found out that they were riding from Toronto all the way to New Brunswick. One of them said, “these kids will be explorers and adventurers when they grow up; that’s awesome.” Whereas I can’t say if that’ll actually happen, that’s the hope: open up their minds and eyes to the great big world out there, and show them everything the world has to offer if we’re open to new experiences.

After playing for a bit at the market and playground, we set off again, this time towards Picton. We took the Glenora ferry across, and by the time we got across to Picton, we were feeling pretty tired. We asked around, and someone recommended the “Sportsman Motel” in Picton.

We thus made our way there, and decided to stay for the night. We had a little apartment with a kitchen, two double beds, and a sofa bed, so everyone had lots of room to sleep.

We washed our clothes in the bathtub. Maya really wanted to  help, so off to the bathtub she goes, and she had a blast helping us wash the clothes. The older kids got some TV while we were doing that.

The motel owner allowed us to bring the bikes inside, so we did that, but we left the chariot outside, and had no issues.

For a motel, I thought the price was a bit high, but hey, it was a little apartment in Prince Edward County during tourist season, so it’s to be expected.

We had a great night’s sleep on some comfy beds, and we set off the next day towards Consecon. Read all about that leg of the trip on this post.

1 thought on “Small town markets and pirate playgrounds – Bath, ON”