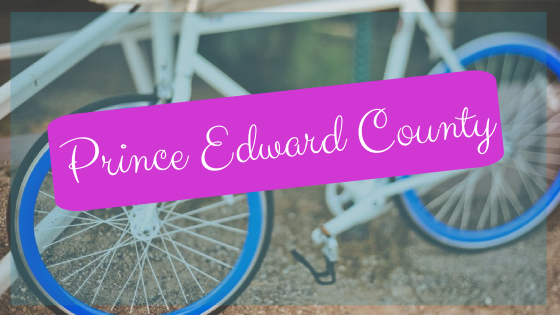 One of the most rewarding things about setting out on a cycling adventure with my family was seeing the beauty of the natural Ontario world, which escapes us when we drive down the 401. We live next door to gorgeous Prince Edward County, but rarely take the time to visit it or to truly take in the beauty of Lake Ontario.

Me, my husband, and three children (ages 6, 4, and 2), left Kingston, Ontario, on May 28th, 2016, and started riding our bicycles. On May 28th, we cycled from Kingston to Bath, On, and enjoyed the little town of Bath on May 29th, before continuing to Picton, where we spent the night.

After spending the night at the Sportsman Motel in Picton (not too far from where the ferry dropped us off), we set off again towards Wellington, ON. Our goal had been to reach Consecon that day, but we were dead tired by the time we reached Wellington, so we stopped there for the night (more on this in a little bit).

This day of our trip was extremely humid, and we found out the hard way that we were not carrying nearly enough water. Looking back now, we totally did not think the water situation through. We were only carrying about 4 liters for all 5 of us, and we ran out of water in Adolphustown—the middle of nowhere. Farmland for miles and no store in sight. We happened to see a lady cutting her grass and asked if we could fill up our bottles at her house. She responded that she was on well water, which wasn’t good, and so she had to buy all her water from a place 10 kilometers away (in the direction we had just pedaled from).

After seeing we had kids with us, she topped us up, so you see, it’s good to bring children on a cycle trip (come on, you know I’m joking). We got enough water to get us through another few kilometers, but we knew we were going to run out again before reaching our destination, and it was getting hotter and more humid by the minute.

As we continued to bike along, we noticed a winery, and the sticker on their door jumped out at me: it had a picture of a bicycle and said “Ontario By Bike” on it, which told me these were cyclist-friendly people. So I went in, and asked if we could get some water and maybe set up our tents for a little rest until it got a little cooler outside. David, at Bergeron Estate Winery, was very kind to us. He gave the kids juice and water, and allowed us to set up our tents on his property to rest up and get a bit of shade before setting out again.

We decided to try some of his pizza, and we highly recommend it. We were able to watch him making it, which was pretty cool. Once it was ready, we sat out on the patio with the pizza, and Dan and I shared a glass of white wine. The pizza and wine were both soooooooooo good! David was really accommodating to all our requests, including making a part of the pizza without cheese for M-girl. We really enjoyed our time there, and maybe Dan and I will return on our own for a date at some point.

After resting up at the winery, we decided to ride to Bloomfield, where we stopped for ice cream at Slicker’s, a little ice cream shop famous for its apple pie ice cream. They put three fresh apple pies in each batch of this ice cream, and you can taste that deliciousness in every bite. Their passion fruit ice cream is awesome, too.

At this point we weren’t sure M-girl was totally over her dairy sensitivity (it triggers her eczema), so we got her some dairy-free candy at a little shop down the road. She’s since had some dairy on the trip and no reaction, so yay!

Bloomfield is a cute little town, but we had some more mileage to do that day. Thus, after our ice cream stop, we headed off on the bikes again. We set off towards Wellington, and our next stop was Wellington Beach. This was a somewhat sandy beach (there were still lots of rocks though) but it was still absolutely gorgeous. Off went the shoes, and K-girl didn’t even think of taking off her helmet before going towards the water to jump over the little waves.

After having some fun at Wellington beach, we continued riding through Wellington, and found an awesome “adventure playground”—all wood, with hidden mazes and pretty neat structures for the kids to enjoy. K-girl enjoyed playing in her “secret lab” with secret passageways, and giving us a tour of her “facility.” It was a pretty cool play space/park.

The kids played there for quite a while, and by this point I realized how exhausted I really was, and I just didn’t think I could ride anymore that day. I wanted to find a place to sleep. We don’t have data on our phones, so we’re dependent on Wi-Fi or on simply asking people along the way. We decided Dan would stay at the playground and watch the kids, and I’d just ride and see if I could find a place to spend the night.

I walked into another little ice cream shop and asked if there was anywhere to stay. The folks there weren’t sure there would be anything nearby with vacancies, since it is after all, tourist season in Prince Edward County. So after talking to them a bit about the trip, I decided to just ride my bike down the street and see if I could find something.

I soon noticed a little place that looked a bit like a house and had a sign up front that said “Newsroom Suites.” Initially it sort of looked like a place that sold houses, but I thought it would be worth a try. I talked to Kathleen, the host there, and found out that this was a newspaper that rented rooms on the floor above. I went and had a look, and this place was awesome. I called Dan, told him the price (it was a bit pricey, but pretty standard in the county, I guess), and told him it was worth every penny. I loved this room.

We had a relaxing evening in the suite, and got a good night’s sleep before heading out to Presqu’ile Provincial Park the next day. Check out the post about Presqu’ile here.

What do you love in Prince Edward County?