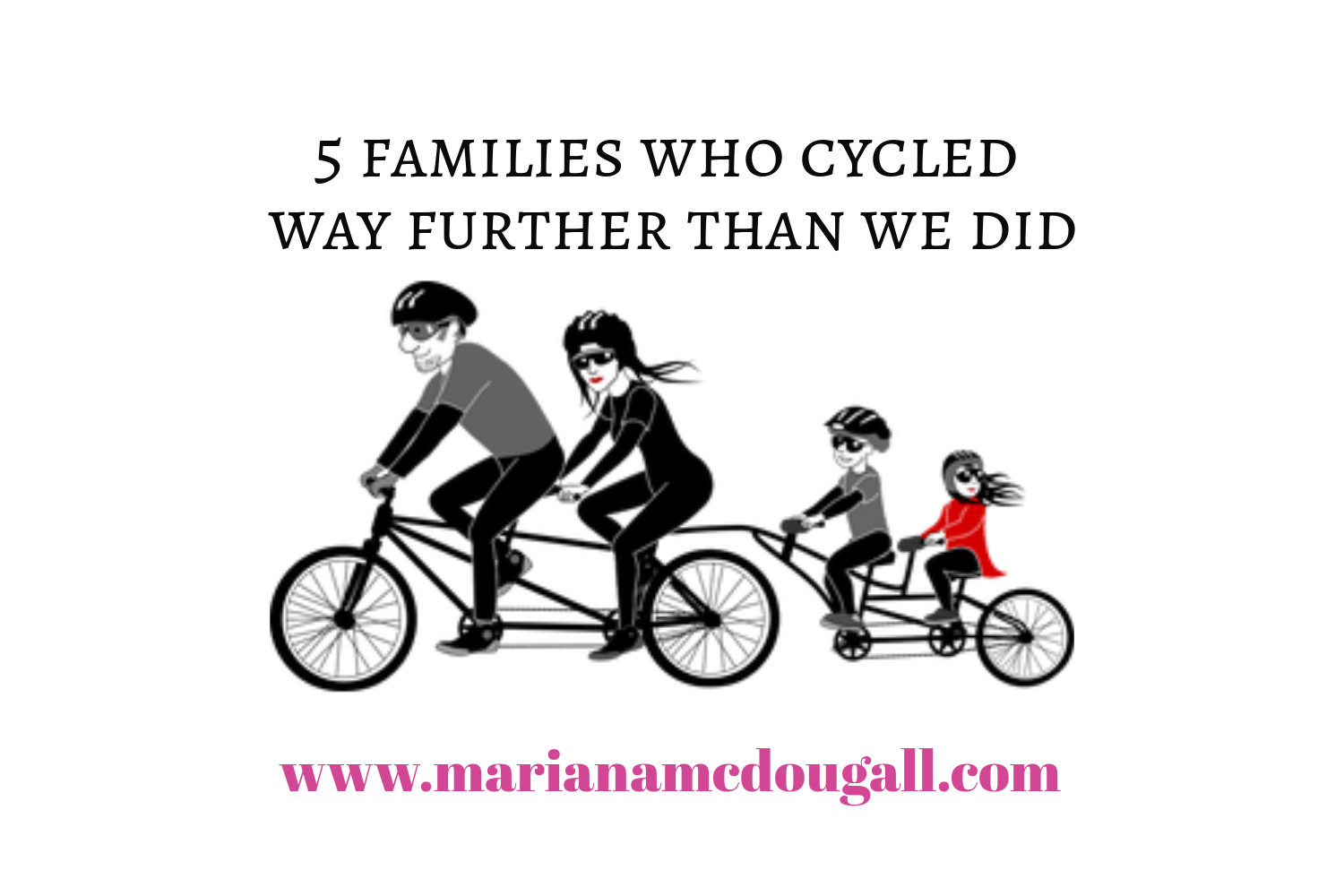 We had such an amazing time during our family bike touring adventure, we’re already dreaming about the next one. Travelling by bike is both a wonderful way to appreciate the beauty around us and to learn some wonderful life lessons.

When we tell people about our bike adventure, we encounter all kinds of reactions, some good, some bad. But the common thread is amazement that we’d cycle that far with three children aged 6, 4, and 2. To us, travelling by bike was a challenge, but one that we took up happily.

In our experience, family bike touring is a mode of travel unparalleled by any other, and we saw things on our bike tour that we would never have experienced if we were driving down the 401.

Plus, as I keep telling people, it’s a lot easier to travel with young children by bicycle than by any other means. Instead of trying to entertain antsy kids while stuck in traffic, you get to get off the bikes and play tag, visit a playground, or simply lie down on the grass when the kids need to burn off some energy or are tired of being on the bikes.

Although some people were pretty impressed with our little adventure, as far as family bike touring goes, we put in very few kilometers (it was still lots, considering we had zero experience).

There are families out there who have done incredible bike tours, and they inspire us to get back on our bikes and see more of the world. We don’t have any solid plans for another bike tour yet, but it’s definitely on the back of our minds to go on another tour at some point. We’re being inspired by several families who choose self-propelled travel. Here are five of these families.

I believe learning about the Vogel family may have been what initially sparked Dan’s (my husband’s) interest in family bike touring. We watched a great TEDx talk by Nancy Sathre-Vogel, in which she talks about conquering fear to accomplish those things you once thought impossible.

She goes on to describe her family’s amazing bicycle tour from Alaska to Argentina – a 17, 285-mile (27, 818-kilometer) journey, which taught them about themselves, their family, and the generosity that the world will offer you, if you’re willing to open yourself up to it.

The Vogel family’s incredible Alaska to Argentina adventure wasn’t their first bike tour. They had already travelled a long way by bicycle when the boys were eight years old. That trip was in 2006, and the Alaska-Argentina one was in 2008.

When the Vogels started their trip of a lifetime in 2008, their twin boys were 10 years old. They took three years to complete their amazing journey, and they continue to inspire families to grab life by the horns and live their own adventures. They inspire “normal” folks like us with public speaking, books, and interviews on several outlets.

By the time their son was born, Canadians Friedel and Andrew had already cycled over 48,000 kilometers together.  Much like us, they started out with no experience, simple gear, and a big dream – to cycle around the world. Having had that experience, taking off on bikes again with their small baby was simply an adjustment to an already adventurous life.

They headed out on the bikes again when their son was only 5 months old, doing a tour around the Netherlands, Belgium, and France, and followed that with a tour of Cuba, Switzerland, and other, shorter trips in Europe.

They not only inspire people with their amazingly adventurous spirit, they also provide practical advice for anyone considering bike touring. For anyone who has a toddler and is itching to see the world by bike, Friedel and Andrew offer some tips on keeping a toddler entertained during a bike tour. Their suggestion to bring balloons is my favorite by far, and I’m definitely going to do that for our next family bike tour.

Friedel and Andrew inspire families like ours to get out and see the world in ways that most people would find unattainable. But, as I like to say, your reality is only limited by your imagination (barring the laws of physics, of course).

There’s very little information (other than pictures) about them online, but their kiddo looks to be about 2 years old in this picture. Their map shows that they likely started in Foz do Iguaçu, and have so far made their way up into Cusco, Peru. They’ve cycled over 4,000 kilometers so far.

I’m somewhat confused as to where they’re from – some of their photo captions are in Portuguese, some are in Spanish, and some are in French. I think one of them is Brazilian and the other is French, considering their names. I’d love to learn more about this family – but for now, checking out their gorgeous pictures on Instagram is totally worth it.

This family is inspiring to us because they also have three children, and they didn’t wait until their youngest was 2 years old before heading out on their family cycling adventure. As soon as their kids could hold their heads up, they headed off on their family bike tour. So for those who are amazed that we would take a toddler on a bike… there’s people out there heading out with even younger kids—and having an amazing time.

They were already cycle touring before kids arrived on the scene, so integrating the kids into their active and adventurous lifestyle was a given. But they weren’t always sure about kids and adventure, and they offer an excellent insight into how they finally decided to instill an adventurous spirit in their children in this article.

In addition to living life on their own adventurous terms, they also encourage others to do the same with their Family Adventure Project website.

This family had done several shorter cycling tours before heading out with their young children on a 13, 500-kilometer tour around the Americas in 2011. They now live car-free in Hamilton, ON.

We had the pleasure of meeting this lovely family when we were doing our own bike tour, as they hosted us as we passed through Hamilton. Our kids were thrilled to finally be hosted in a house with other kids, and we were able to spend a couple of days in Hamilton enjoying the splash pad, Children’s Museum, and more.

We learned a lot about generosity and giving from Reuben, Heidi, and the kids. Reuben makes some of the best doughnuts around (which we were fortunate enough to try), Heidi makes delicious meals and tells wonderful stories, and their children, without being told, offered  a small toy to each of our kids to take on the tour after we left their house.

We look forward to seeing them again soon, and maybe giving their Morpheus bike a try.

These are just some of the families we’ve learnt about so far. Believe it or not, there are others, and they are living adventurous lives on their own terms. They’re grabbing life by the horns and seeing all that the world has to offer.

If you dream of adventure with your young ones, don’t let imaginary roadblocks stop you. Sit down, turn your dream into a goal, and make a plan to make it happen. In life, the worst regrets are about the things you wish you had done. So get out there, make mistakes, learn, and experience how much generosity can be found around you – and how much beauty you might be missing.

You don’t have to cycle from Alaska to Argentina (or even from Kingston to London), but getting out in nature with your kids and travelling may provide some of the best learning experiences your kids might ever have. So however you do it, get out there, and experience the world with your kids.