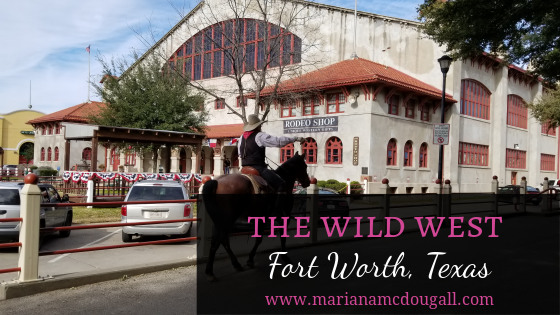 The gunshot rings in the air… and out of it falls a chicken, directly in front of the young boys’ toes. Fort Worth Texas is the Wild West, and you better believe there’s going to be a gun fight.

But not to worry: the bullet is a blank, and the chicken is made of rubber.

After following a herd of cows from the open-air stables to the Fort Worth Stockyards, we take a picture with a cowboy in period dress. We then follow the same cowboy, who has just announced a gun fight is about to take place in the market.

The place is crowded, and getting a good view is hard, but we still get to see the action. With great costumes (including hats, of course), a humorous storyline, and actors that really engage the audience, we’re in for a treat—and the show is free, though they do appreciate tips in their hat at the end of the performance.

After the show, we walk around the shops and try on all kinds of cowboy hats. I’ve always wanted a “real” cowboy hat, and if you’re going to get a real cowboy hat, Texas is the place to do it. And Fort Worth is arguably the best place to get a cowboy hat in Texas.

So we wander in and out of different shops, finding some fairly cheap, but not great quality cowboy hats. We then find the custom hat shop, and the extra price tag is totally worth it. Despite the amount of pink on this particular hat, I fall in love with it the minute I see it. I try it on, and think “this is too much pink.” But after trying several others, I’m still drawn to the extra-girly one. So I settle on that hat, and I’m happy. K-girl tries on a white one and loves it. She wears it for about 10 minutes in the shop, but then decides it’s no comfortable enough.

Later, we visit another shop—the one with the less expensive cowboy hats—and the kids decide they’d all like baseball caps from Longhorn General Store—they want to go back there for the hats, and probably just as much for the free dip samples. Dan had already purchased a hat for himself at Brass Pro Shops earlier in the week, and while we encourage him to also get a cowboy hat, he doesn’t find anything that he loves. So he sticks with the one he already has.

After some time looking in the shops, we make our way outside, where a band is playing bluegrass. It’s not my favourite type of music, but they’re playing a slower tune and declaring their love for Maryanne, so we just have to stop and give it a listen. The kids have a great time jumping and dancing, and I join in the fun.

After dancing to our heart’s content, we start making our way out of the stockyards. We see many more cattle and horses. We get to pet some horses and chat with the cowboys who are riding them. The cowboy with the very, very large mustache recommends Horseshoe Hill Cafe up the hill, so we take a walk to the cozy restaurant.

Texas’ reputation for serving sizes is on full display here, where a single steak could likely feed a family of 10. We also order mac ‘n cheese, which was soooo delicious. It was an appetizer, but it was the size of a large dinner, and I was happy to share with everyone. The fries were also good, and we requested they be served separate from the usual accompaniments: a bed of ground beef and melted cheese.

The server who helped us was friendly and patient with all our questions, and our food came to us in fairly reasonable time. The restaurant wasn’t large and it wasn’t very busy, but it looked like there was only one server on duty. There was a family behind us, and the man loudly complained that he wasn’t “happy with y’all’s service.” We stayed in the restaurant longer than the family behind us—it was a lot of food and were enjoying it. We also thought it was reasonably priced, considering the size of the servings. Before leaving, I made a point to tell the server who helped us that there’ll always be someone who isn’t happy. “You’re doing a good job, and we really enjoyed our meal.”

Perhaps the family behind us didn’t receive good service, and it’s too bad if that’s the case. But if I received good service, I’ll make it a point to tell my servers. Because a really bad day could turn into a great one for somebody, if only we take a minute to acknowledge their efforts.

We enjoyed ourselves in Fort Worth, and I think I’d like to return someday. Before we leave town, we make sure to take some photos in front of the Texas flag—and I wear my cowboy hat for the picture, of course.