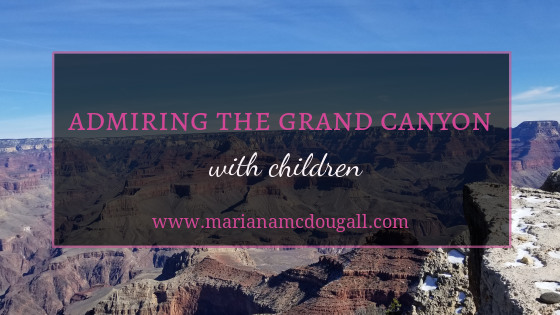 The animal looks like a cross between a porcupine and a pig; yet, its closest living relative is the hippopotamus (although distantly so).

It walks around in the snow, sniffing here and there, while throngs of tourists stop to look—some at a cautious distance, others far too close for comfort in a national park where interacting with wildlife is highly discouraged.

Without warning, it bolts—perhaps the click of the flash from the person behind us has startled it.

The javelina (pronounced havehlina) family has been hanging around for months, and has probably migrated from the hottest parts of the desert. That’s where we’ve just come from. And here we are, in the snow, in the year where we thought we’d be snowbirds.

During this trip, I wanted nothing to do with snow, but here at the Grand Canyon we’ve encountered it. I’m a little indifferent. It’s not overly cold, so it’s OK. But the kids are loving it. They’ve outgrown their snow boots, and we didn’t buy new ones, because we figured we wouldn’t need them. So here they are, wearing their rainboots in the snow. Well, they’re waterproof, and it’s not that cold, so it works.

Dan and I had wanted to hike the Grand Canyon, but the logistics at this time of year, with a vehicle that we don’t trust in the snow, and with three young children who aren’t interested in the very long hike have us re-evaluating our wishes. One day, we’ll return and do the hike. This time, we content ourselves with admiring the beauty from the lookout points. And what beauty!

The canyon is magnificent, and a mere photo does not do it justice. Artists try to recapture the beauty in their works, and some are quite successful at doing so. Regardless, seeing it in person has no equal.

In the end, observing the canyon as a family and enjoying the natural beauty of this place together—making memories—is more important than a photograph. Don’t get me wrong—photographs allow us to look back on time together after the pictures fade from our memory. But if getting a good photo gets in the way of having a good time and sharing togetherness, it’s not worth it. After a few failed attempts we set the camera aside and chill out, watching the kids and their wonder at the beauty nature puts on display. And we watch them play with the snow.

After admiring the canyon from a distance, we go to the Visitor Center to learn more about the area. The screen for the video presentation is impressive: a globe shows a short film on loop. The video explains how the canyon has been formed over millions of years, and explains the role of the Colorado River in the process.

There’s also a more “traditional” movie theatre on the other side of the Visitor Center, where we watch another short film about the park. Before leaving, we get Junior Ranger booklets for the kids, and they complete the exercises before being sworn in as Junior Rangers. The staff at the park is knowledgeable and friendly, and we have had a wonderful time here. The kids are thrilled with yet another National Park badge.

After our time at Grand Canyon, we made our way to Kingman, Arizona.The drive was gorgeous.

We ended the day with (what else?) a visit to the library.

I take the opportunity to sit down and get some freelance writing work done. While I do, several people come and talk to one another, and I get the impression this library is a social hub for residents of the town. I join in to a few whispered conversations, but still manage to get some work done.

We are enjoying ourselves and learning so much on this trip—whether we’re outdoors in nature’s beautiful creations, such as the Grand Canyon, or reading books, playing games, and getting to know local communities in libraries. We’re deeply thankful for this opportunity.

2 thoughts on “Grand Canyon: Up Close with Wildlife”