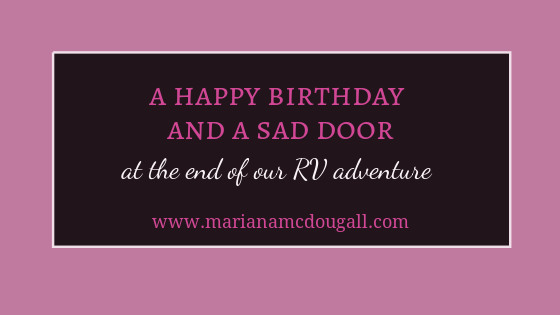 We stayed at Indiana Dunes State Park for G-boy’s birthday, and committed not to drive too far on his special day, which we started by opening gifts. The girls got to open a small gift also. They were happy that one of G-boy’s birthday gifts was Lego, because in our house, Lego is a shared toy, so if one of the kids gets it, they know they’ll all get to play with it regularly.

Indiana Dunes State Park is very nice, but it rained buckets when we were staying there for G-boy’s birthday. This year, as usual, he asked for a simple birthday party: we were to have a picnic lunch outside, and then come into the RV for cake. With the rain, the picnic didn’t go exactly as planned, but G-boy was perfectly happy when we said we could have the picnic inside.

So we laid down a blanket in the RV and sat the children down in a row (because the space is too small to sit around the blanket). As requested, we had PB & J sandwiches, sliced cucumbers, and fruit salad with only apples, mangoes, grapes, and bananas in it.

After the picnic, we sang Happy Birthday and Parabéns pra você, and then had the cake Giovanni picked out the day before, and he was happy when we sang happy birthday in both English and Portuguese, as we always do.

We of course had to visit a library, since it was raining. We headed to the Westchester Library, which is in a cozy building and has a nice children’s area with toys and lots of books, of course.

G-boy had lots of fun playing with the trains; M-girl set up a whole giraffe family with the duplo, and K-girl read a pile of books as usual. Later, the little ones played on the computers. K-girl was too busy reading to join them.

G-boy had a great day on his birthday, and I’m happy we were able to celebrate him on this day. It’s hard to believe that it was seven years ago that this little boy rushed out into the world in a whirlwind birth that took less than two hours from start to finish. He brings me so much happiness with his giant hugs, his genuine smile, and his curiosity. I’m so blessed that I get to homeschool and travel with my little ones, spending so much time with them while they’re young.

We had tonnes of fun celebrating, and we have been having such a wonderful time on our RV adventure. But it’s not all sunshine and roses. There’s been a couple snags along the way.

A broken door on the “last day” of the trip

After Indiana Dunes State Park, we headed to Michigan on our way back to Canada, as our trip (sadly) comes to an end. There were two things we wanted to do before we left the US for good: Dan wanted to go to Dunkin’ Donuts and I wanted to see what all the hype about Hobby Lobby was about.

So we stopped at a Hobby Lobby in Michigan, where I found next year’s Happy Planner (whose products I fell in love with during this trip). After that, we drove to Dunkin’ Donuts before heading to the border. And it was in the parking lot of that Dunkin’ Donuts that we had the first real issue with our vehicle.

We managed nine months of RV travel in a 19-year-old vehicle without any major issues. There were a couple minor things. We replaced the batteries twice, and we lost the magnifying side mirror on the passenger side. Other than that, we’d been doing really well… until the very last day of our nomadic life.

I will take partial responsibility for the damage—it was me who took the RV into a parking lot that was too small. But as we switched drivers and Dan started to back out, we heard a really big crunching, scraping noise, and I was sure we’d hit one of the parked cars. When we got out to check the damage, I was relieved to see we’d only scraped the fire extinguisher as we tried to squeeze out of the parking lot. The fire extinguisher was fine. Our door, on the other hand…

We couldn’t drive to the border with our door in that state, but we couldn’t wait around to find a replacement door, either—we needed to get back to Canada, as Dan had a commitment the next week. So we did what any engineer would do in a pinch: we used duct tape.

I think for the state of the door, Dan didn’t do too bad of a job. We’ll wait to reorder a door once we’re a little more settled in Ontario and know where we can pick one up and get it installed.

We made it across the border and arrived back in our “home” province safely. We visited a bit with family, but for the most part, we’re just trying to get our bearings in these next few weeks. There’s a lot of changes happening at the same time, and it’ll take time to adjust. More on this in the next post.

Have you ever had an “oops” with your RV that had to be repaired with duct tape?