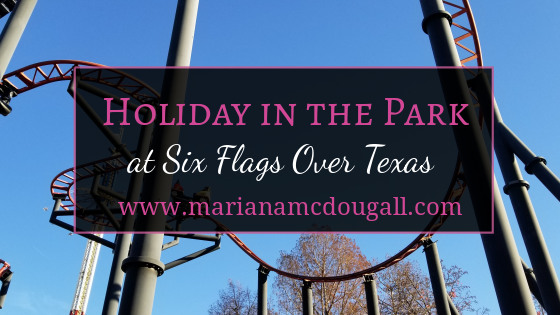 After being a little underwhelmed at Six Flags Great Adventure, I was interested in seeing if the Texas park was better. Don’t get me wrong—the rides in New Jersey were fun. But the park looked old and the staff wasn’t very friendly. I love amusement parks and roller coasters though, so I’m always willing to give things another try.

The Six Flags season passes are also valid at all Six Flags locations (including the one in Montreal), so we’re planning on hitting all the Six Flag parks along our route. The kids and I are thrilled, and Dan is going along for the ride. Literally. Dan does enjoy roller coasters, but as an introvert, a full day at an amusement park is exhausting. So when we go to the next one (in San Antonio), we plan on spreading out our visit over several days.

Every time we go to a place where there’s a potential of “being lost in the crowd,” we snap a photo of the kids, just in case. We all also have Road ID bracelets, and the children know to find a park worker, show them the Road ID, and ask them to call Mama or Daddy if we get separated.

We’ve never had to use either the picture or the Road ID, but having these things gives us a little more peace of mind. We watch our kids closely, but if you have children, you know that all it takes is looking away for 10 seconds for something to happen. So it’s always good to have a safety net.

After snapping the picture, we all head into the park. This time our bags are searched, but there’s no fingerprinting involved, which is a nice change of pace. The first thing the kids see when we walk into the children’s area is a giant playground, and that’s where they decide to go first.

I make conversation with an older gentleman who’s sitting on the bench, and tell him that it’s nice to have the playground there. He jokingly responds, “well, my grandson is in there. You know, I could have taken him to a much cheaper playground. A free one, in fact.” We both laugh and talk about the weather, while the children have a blast climbing and sliding in the play structure.

While the children play, Dan goes off on his own to ride some of the bigger roller coasters. Later in the day, I’ll get to do the same. When the kids have had their fill of the playground, we head over to the rides in the kids’ area. The first ride the kids go on is the Bugs Bunny Cloud Bouncer, a kiddie version of a drop tower.

While some of the children let out mini-screams, M-girl lets out hearty giggles each time the seat drops. At four years old, my little girl is already a bit of an adrenaline junkie, and really resents that she can’t ride the “big roller coasters.”

But she’s tall enough for some of the bigger rides, and loves the Pandemonium, despite the horrified look on her face as the cart moves along the track. As soon as the ride is over, she says, “that was so much fun!” and asks to go on it again. So we do.

The kids enjoy other rides, including the Conquistador, a rocking boat ride that has M-girl laughing while the adults scream. We also ride El Sombrero, which is exactly what it sounds like: a giant, rotating sombrero that’s a pleasant ride for both kids as well as adults who prefer milder rides.

The park is divided into regions, including Mexico, France, Old South, Texas, and of course, Gotham, among others. Some of these regions sell themed meals as well. For example, you can buy freshly made quesadillas or fajitas in Mexico. We treated ourselves to these meals, but as in most amusement parks, the food was overpriced and unimpressive. The smell of it was more promising than the actual food, but it wasn’t that bad.

It did get cold later in the day, so we went into a shop and looked around ’till the kids warmed up. But of course, it’s not nearly as cold as back home this time of year, so to make it snow at Holiday in the Park, there are some machines set up that make what looks like snow—but upon closer inspection, looks like soap bubbles.

It’s still a lot of fun for the kids, who try to catch the “snow flakes…” on their tongues. After a brief explanation that this isn’t actually snow, they content themselves with catching the bubbles on their hands.

Another fun thing we do is ride the steam engine around the park. The tour guide is pretty funny and has lots of puns to go along with his narration of the park’s rides and history. All of us enjoy the ride and the jokes, and we’re disappointed the next day, when a different tour guide is present. This one didn’t make any jokes nor said anything about the park; he only announced the stops. To his credit, it was later in the day, and the crowd in the train was a little rowdy, so they probably wouldn’t have heard the jokes anyway.

In addition to having a blast on the rides, we also enjoy the sights. The park has been beautifully decorated for Holiday in the Park, with bright lights and neat decorations everywhere. There’s a large tower that’s been decorated in such a way as to look like a Christmas tree.

At the entrance to the park, there’s a “tree of trees” which is lit up at various times during the day. We also find a Texas flag ornament…

and a giant cowboy boot wearing a Christmas hat.

In addition to seeing Texas-inspired decoration in several places at the park, we  find something else that makes me think, “only in Texas.”

I remember back when I did a garage sale in Kingston, and a teacher was looking through one of the kids’ books. She said she couldn’t buy that one because she was purchasing for her class, and there was a gun in this book. The picture was of alligators carrying hunting rifles.

Back in Ontario, we shelter our kids from looking at rifles in a book (which if you ask me, seems a bit over the top. It’s always best to discuss things than to censor them, in my humble opinion). While we shelter kids from weapons in Ontario, here in Texas, kids sit in chairs that spin them around two giant guns (don’t worry, they’re just sculptures). To me, it’s a bit of a funny moment. I’m not sure how other Ontarians would feel.

Later in the day, I ride a couple of coasters on my own. First I ride the Texas Giant, which is super awesome. It’s got some major drops and it’s pretty long, too. I enjoyed myself so much on this roller coaster I lost my voice shortly after riding it.

I also went on the Super Man: Tower of Power, which is like the Drop Tower at Wonderland, except this one goes up and down a few times before doing its final drop. The last roller coaster I went on was the Mr. Freeze Reverse Blast, which is a backwards coaster worth every minute of the long wait to get on it. It really does “reverse blast you,” and it’s pretty awesome.

On a related note, you should click the link for that ride to check out the awesome copywriting. A+. Actually, a lot of the copywriting on the Six Flags websites are top notch. That’s what happens when you pay your writers well. But I digress. I also finally got to go on The Joker, which I had wanted to ride back in New Jersey but didn’t have the chance. It was a fun ride.

After getting my thrills on, I go meet up with Dan and the kids at the “snow hill,” which has been set up especially for Holiday in the Park. Dan laughs at the hyper-safety involved in this ride: two people at the top explaining how you must sit at the very back of the slide, and two people waiting to catch you at the bottom. For our Canadian kids, who are used to sliding down a hill three times this size on anything they can get their hands on, it’s a bit of a humorous moment. As we leave the hill, two women ask us if it’s worth the wait. My response: “Well, we’re Canadian… so probably not.” They laugh and say they asked the right people.

The park has been beautifully decorated for the season, and it’s nice to see a Christmas-themed event where there are actual references to Christmas.

While I’m a supporter of not erasing the history of how things like Christmas trees came to be incorporated into our Christian holiday, I do feel that if you’re going to market something as Christmas-themed, you need to actually recognize what the holiday is about. So it’s refreshing to see a nativity scene at an amusement park. Gun-inspired child rides not withstanding.