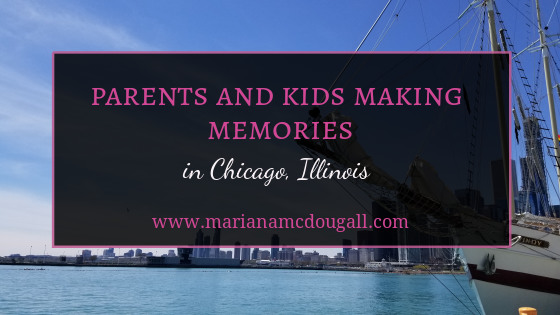 As I walk through Millennium Park, I’m reminded that when I lived here, none of this existed. But when I look up, I recognize the skyline. The building with the pyramid top, the one whose top looks like a diamond, the Sears Tower (sorry, Willis Tower).

As my kids excitedly make faces and strike poses under The Bean (sorry, Cloud Gate), I’m struck with emotion, and my eyes get a little watery.

I don’t remember this reaction when I came back to visit ten years ago, which was eight years after I’d left for Canada. Perhaps it’s the fact that my children are here with me, and that when I was here observing this skyline for the first time, I was myself a teenager—a child, really, though one with more responsibilities than most.

I love watching how much fun they’re having at Millennium Park, which is a “new” addition since I left Chicago for good in December of 2000.

There’s something else that’s “new” in Chicago—which wasn’t even here when we visited 10 years ago: a beautiful kids’ park and playground called Maggie Daley park. The children, especially the little ones, love this place, and no wonder.

There’s a climbing structure, several slides (two of which are gigantic), places to balance, and more. There’s even a rock climbing wall, though we don’t think it’s open this time of year (and it would get a little expensive for a family of 5, as climbs start at $25 per person). There’s also an ice skating “ribbon” available in the winter time that’s free to use if you have your own skates. You can also rent skates for a fee.

We really enjoyed our time at Millenium Park and Maggie Daley Park, and did quite a bit of walking our first day in Chicago. We went to some other places that brought back memories, too.

Making our way down Chicago’s riverwalk, I remember the first time I was on the Chicago River, on an architectural tour that I probably didn’t grasp much about, my English being so new, so child-like at the time.

The colour of the water is beautiful, and we enjoy watching the boats pass by. We also see a fountain that wasn’t here back in the 90s, and the kids have a blast watching the water jet go off.

We follow the Riverwalk until we turn towards Navy Pier—another Chicago landmark that’s full of memories for me.

I remember coming here and watching the fireworks in the summer. It seems so wasteful, so earth-polluting now, but back then, I was mesmerized by the weekly displays. I never went on the Ferris wheel, but it’s such a Chicago icon that the minute I saw it, I was transported back to my teenage years.

I was even more back in my memories when I saw the Spirit of Chicago—the ship where we had our Senior Breakfast. It’s long been a Morton East tradition that before prom, the seniors have a special breakfast on the water. We eat, dance, and watch the Chicago Skyline as the boat takes us from Navy Pier and back. All I have from that time are a couple of pictures and some beautiful memories. And today, we’re making new ones, with our children by our side.

I lived in Chicago for four years, and during those four years I never visited the Chicago Cultural Center nor the downtown library. We lived in the suburbs (Berwyn), and there just wasn’t much need to come downtown too frequently.

I used the library in Berwyn plenty—I even volunteered there—but I never came to the downtown one. 10 years ago, when Dan and I came to Chicago during our Great North American Swing Road Trip, my sister took us to both of these buildings. Now, yet another 10 years later, we’re coming back here with our children.

The cultural center is interesting, but a little too adult-centered for the kids. They think the ceiling and floors are cool, but don’t really have the patience to observe all the wonderful little details of Chicago’s original public library. We only stay for about twenty minutes, and then head to the Harold Washington branch of Chicago’s Public Library.

The downtown library is a lovely place for kids with plenty for them to do. There is, of course, a very large collection of children’s books, but there are also all kinds of toys—a food truck, a construction station, an “imagination playground” with lots of foam blocks and noodles, a puppet theatre, and more. There’s also a creative space table with plenty of activities for the children to choose from.

The little ones have loads of fun playing dress up, cooking meals for me in the food truck, and making new friends.

While we’re at the library, K-girl reads a pile of books as usual, and she also gets to do a pretty neat activity. The library has a mini-workshop for kids seven and up on how to create zines. K-girl participates and loves it. She also shows her book, “Monster Slime” to the librarian (we had brought a copy on the bus). After hanging out at the library for a while, we head to dinner.

Chicago is famous for its deep dish pizza, and it’s absolutely delicious. Lou Malnati’s is a cozy restaurant downtown Chicago (with several other locations in the Chicago Metropolitan Area), and they serve all kinds of Italian food—but I’ve come here for the pizza.

I order “The Lou,” which sounds kind of funny to me, but it’s a delicious vegetarian deep dish pizza, and I enjoy every bite. Dan has the “Chicago Malnati’s Classic,” G-boy and K-girl have burgers with fries, and M-girl orders a burger with fresh fruit.

We do splurge on some unhealthy drinks, and I have no regrets. The food was so incredibly good. The service could be better, but we still enjoyed ourselves very much. I’ll be back here next time I come to Chicago for sure.

It was too cold for swimming, but that doesn’t mean you can’t spend some time on the beach. It was really lovely to look at beautiful Lake Michigan and reminisce about old times, some very difficult, but some very blissful, too. Watching my children play in the sand and come up with whole worlds and stories about insects they find on the beach brings joy to my heart and quietude to my soul.

After a full day in Chicago, we catch the bus back to McCormick Place, which is about the only place to stay with an RV in the city. There are campgrounds, but they’re pretty far away, and when you don’t pull a vehicle, the closer you are to a city, the better, so that you can take public transit to get to and from places.

McCormick Place’s amenity for an RV is really just a place to park, but unlike New York’s only option for RVs, they don’t charge you an arm and a leg for it.  For US$35 a day, you get to park near to basically all the major things in the city, or within steps to public transit that will take you to those things.

There’s no RV hookups at McCormick Place, but it was certainly a really convenient place to stay. We felt perfectly safe where we were, and we actually parked near a small RV from Quebec. If you’re looking for a place to stay with your RV in Chicago, McCormick Place is it.

I enjoyed revisiting my past while I walked through the streets of Chicago, and I wish we could have spent more time there. Someday, I’ll return, and I’ll stay for a while, revisiting all the places that had such a significant impact on my life. For now, we get ready for another amusement park—the last one of the trip.