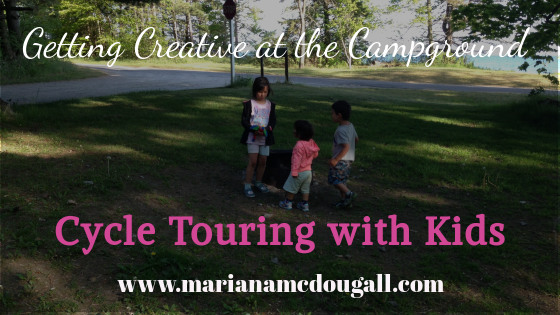 After arriving at Presqu’ile Provincial Park on May 31st, we started setting up our tents and getting ready for the night. The kids played and had a grand time while Dan and I were getting the tents ready.

Katia set up a whole campsite for her parrot (the one toy she was allowed to bring on the trip), with a campfire pit and everything. It was ultra creative (and ultra adorable).

We still had a little bit of daytime left, so we checked out the beach, which was quite rocky, and the kids had fun throwing rocks in the water.

There were two couples camping in small campers nearby, and they were really friendly. We enjoyed nice conversations with them, and you could see they were enjoying watching the kids as well.

We stayed just one night at the park, and sleeping at a campsite with the kids was no trouble. We had camped once before with the kids, without much success, as Maya wasn’t sleeping well at that time, but during this trip, we didn’t have any issues camping.

After leaving Presqu’ile, we made our way to Cobourg, where Dan had arranged a Warm Showers host family for us. Little did we know that this family lived in a gorgeous home by the waterfront, and we had our own private room for two nights.

Often, Warm Showers hosts offer their backyard for camping, but we were able to stay indoors with Mark & Linda, who were absolutely delightful hosts. Their house in Cobourg was beautiful and large, but cozy at the same time.

Whenever I enter a wonderfully decorated home, I’m always worried about breaking something—especially when the kids are with us. But Mark & Linda were not that kind of people. They were super down-to-earth and hospitable, and Linda even made us dinner the night we arrived (never, ever an expectation with Couchsurfing or Warm Shower hosts. Some people are just ultra nice like that!)

Linda had gone out of her way to make us feel  welcome, and had set up a room for us to sleep in. We even had a bed! There were also some great, friendly pets in this home. The dog, Puck, enjoyed all the petting form the kids, and the cats, Yoda and Tolstoy, were typical cats. Welcoming petting here and there, but mostly ignoring us.

We spent the next day hanging out at the beach, which was just lovely. Coubourg beach is a sandy beach—no rocks, and a nice little splash pad and playground for the kids.  I’ll definitely return here one day for a solo vacation.

Later that day, as we were returning to our hosts’ house, we noticed a little consignment store called Mom 2 Mom.  Katia was looking at the window at a My Little Pony book, when one of the ladies inside came out and asked if we’d like to come in. We were somewhat puzzled, considering there was a “closed” sign on the door.

The lady said they were doing their weekly inventory and we’d be welcome to come in. So we did, and hung out for a while. There were three ladies working, one of whom was also a homeschooler. We told them about our adventure and they were excited and mesmerized about it at the same time. We must have spent at least about an hour at the shop, and we felt really at home. If you’re in Cobourg, I highly recommend checking it out. We decided to buy three small books for the kids while we were there.

Later that day, Janice and Gus (Dan’s parents) met up with us at a little restaurant and we had dinner together. There was a live band playing, and we enjoyed listening for a while, but the kids were really antsy, so we decided to get going. I wish we could have listened a little longer, but such is life.

We stayed an extra day in Cobourg, and we’re very thankful for our gracious hosts who agreed to put us up for an extra night at the last minute.

Staying with Linda & Mark also opened up a a great mini-community for us. As we are courchsurfers and warm showers hosts ourselves, we hosted 2 cross-Canada cyclists about 2 months after coming home. They had just stayed with Mark & Linda in Cobourg. It was fun to share our stories about cycle travelling and about our gratefulness to our wonderfully giving hosts. We’ve had similar conversations with other cyclists that we’ve recently had at our house.

Hope you enjoyed that update. What kindness have you found while travelling?