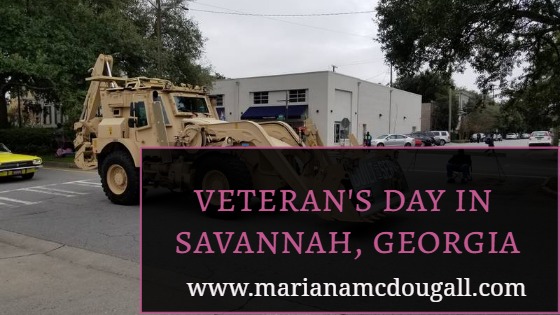 “Mama, spanish moss is like your hair! If you pull it, it boings back up again!” Truly, these interesting epiphytic plants do look like strings of curly green hair hanging down from nearly every tree in Savannah, Georgia. The scenery they provide, for those who haven’t been here long enough to take it for granted, looks like something out of a fantasy tale.

The Spanish moss gently moves as the breeze touches it, and it fills you with peace to look at these wonders of nature. Yet, they don’t fill me with quite the same wonder as the beautiful weeping willows. I still enjoy the gorgeous scenery in Savannah, though.

We’ve read that you can park for the day at the Savannah Visitor Center, but inconsiderate campers have ruined it for overnight parking. At $12 to park a 32-foot RV for the day, the cost is not bad. But when we pull up to the ticket machine and press the button, no ticket comes out. The barrier comes up as we get closer though, so we move into the parking lot. After parking the RV, we come into the visitor center for some information on the city and to figure out what’s happening with the parking.

Joel, a friendly and funny guy at the Visitor Center, tells me:

“Parking is free today, and guess what… here’s the good news: you can literally stay there all night if you wan to. But here’s the bad news: you better be the heck out of there by 9:00 o’clock tomorrow morning.”

Joel’s laughter is contagious, his stories are entertaining, and his knowledge of the city is impressive. If you’re visiting Savannah, the stop at the Visitors Information Center is well worth it. The children leave the center with a postcard each, as a souvenir.

As we walk in search of some of Savanna’s famed squares, we come upon what seems to be people getting ready to watch a parade. Veteran’s day was yesterday, but since it fell on a Sunday this year, they moved the parade to Monday, November 12th. We ask a couple of men whether it’s a parade, and they say yes, so we make ourselves comfortable next to them. The men are both wearing caps that say “veteran” on them.

As currently serving military men and women march by, these veterans applaud them and yell out, “thank you for your service.” Reserve Officer Training Core (ROTC) and Junior ROTC students display impressive marching skills, and cheerleaders and dancers wearing beautiful costumes wave their flags, pom poms, and move to the beat of marching bands.

Floats of all kinds pass by, some advertising local businesses, others carrying veterans and volunteers of various local charities. Many parade participants throw candy at the children in the crowd, so that by the time the parade is over, the children have their hands full of sweets.

While we watched the Ottawa Remembrance Day ceremony via the Internet yesterday, attending a live parade is more exciting for the children. It’s interesting to note the differences between Remembrance Day and Veteran’s Day.

We really enjoy our time at the parade. One lady from the parade gives us each an American flag, and we wave it as more veterans march by or ride floats in the parade.

One JROTC students breaks off from the parade and asks the two men next to me, “are you veterans?” and when they say yes, she hands them a card. Then she turns to me and asks, “are you a veteran?” and I say, “Not an American one.” She says, “it’s OK, you can have one too,” and hands me a card.

The card says, “On this Veteran’s Day, we thank you for your service.” I will glue this card into my day book, and will cherish it for a lifetime. While my service was simple and short, my seven years in the military were some of the most transformative years of my life. After finishing basic training, I was convinced that I could accomplish anything I set my mind to, and I like to think that I have (and will continue to).

We get the chance to see some neat vehicles, including a mini airplane, a mini jeep, and “two hippies in a van,” as one of the veterans beside me put it.

One of the children’s favourite floats is one for a roofing company, where a kid is literally sitting on a roof, throwing candy to the children in the crowd.

After enjoying the parade, we check out some more squares. As suggested by Joel from the Visitors Center, we also take the free ferry to the other side of the river.

I make conversation with the ferry workers standing outside, and show them a picture of the Newfoundland-Nova Scotia ferry. They agree that it looks like a cruise ship, and we all have a good laugh together.

Savannah is filled with history, and there are several beautiful sculptures and monuments throughout the city. The African-American monument is heartbreakingly beautiful, and painfully (and thankfully) true to history.

An inscription recognizes the role of Savannah in the institution of slavery, and a quote by Maya Angelou reminds onlookers that Africans were stolen, bought, sold, and thrown overboard when the journey from their home to a place where they were considered property proved fatal.

Looking at this monument, the cruelty of humanity gives you a figurative slap on the face. It wasn’t so long ago that we belittled those who looked different than us, to the point that we forgot they were people.

While I am an optimistic person who loves to see the good in the world, we cannot ignore the horrors humanity has been (and is still) capable of. It’s for this reason that I believe  love must be our goal: if every action we take is based on love for our fellow human being, how many cruelties could we eliminate? How many wars could we prevent?

Another beautiful monument commemorates those who gave their lives in the second world war, as well as all those who contributed to the war effort from home.

Happier sculptures include the one of the “Waving Girl,” as well as the Olympic Yachting Cauldron.

After our walk through River Street, and some antique stairs “at our own risk,” we stop by one of Savannah’s candy shops. At Savannah’s Candy Kitchen, praline samples are on offer, and you can watch popular Southern treats being made.

Chocolate-covered rice krispy treats, caramel corn, candy apples and more create a vision that’s every child’s dream. A man passes me by and says, “I feel like a kid in a candy store!” And I’m sure we’re all thinking the same.

Dan’s parents sweet neighbour, Marg, had surprised the children with some cash for a rainy day during our trip. It rained a tiny bit that day, so the children used a portion of their gift money to buy themselves a treat. G-boy and M-girl delighted in chocolate-covered pretzels, and K-girl found herself some Harry Potter jelly beans.

Another candy store, River Street Sweets, offers delicious samples of pralines and various kinds of popcorn. We also visited Byrd’s Cookie Company to try their famous Georgia Peach cookies. You can sample all of the cookies on offer at the store, but remember that after you taste them, you won’t be able to resist buying them.

These are truly gourmet cookies, the type that you eat like a truffle: one small, one or two-bite cookie is enough. Sit, savour it; really take in the flavours. These tiny morsels of heaven are baked to perfection, and they are tiny in size, but big on flavour.

After enjoying our treats, we walk through some more squares before heading back to the RV. Savannah is a beautiful city, and we have truly enjoyed our time here. What is your favourite thing about Savannah?