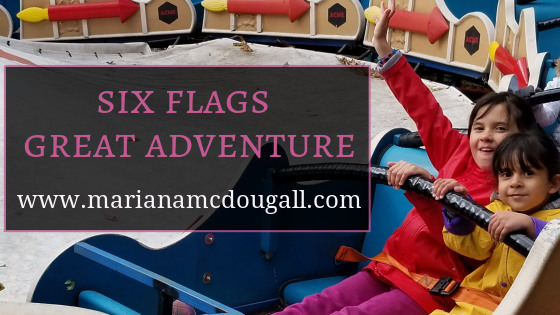 After our awkward experience at the museum in New York, I suppose we should have expected other security checkpoints.

But as an employee scans my fingerprint so I can enter an amusement park, I’m appropriately “amused” at the situation. I understand that security is important anywhere large crowds gather, but fingerprinting a 4-year-old before she can ride on kiddie coasters seems a little over the top.

After experiencing more bureaucracy than a Brazilian embassy can dish out (and that’s quite a feat), we finally get through the gates and into the park. M-girl is in heaven. She’s been telling everyone who would listen that she was going to Six Flags Great Adventure in New Jersey since we left Kingston on August 29th, and her moment of glory is finally here.

Because we’re visiting the park in October, Fright Fest is happening. Before we entered the park, we told the children that after dark, the scare actors would come out, and it would be scary, so we should leave before the sun set.

As we walk into the park, one of the first rides we see is the carousel. M-girl wants to ride it, of course, so on we get. There is no line for this first ride, so that’s nice. However, the horses are somewhat awkward for the adults, as there’s no place to put one of your feet, and it hangs at an odd angle. And I have to be honest: this park looks old. And the rides look old.

Although I love amusement parks and had been looking forward to coming to this one, I must admit that Canada’s Wonderland in Toronto is light years better (even though it’s only 7 years newer). The children’s area in the park is nice,  but smaller than at Wonderland. Nevertheless, the kids had fun, and I got what I came for: Kingda Ka, the tallest roller coaster in the world (but not for long).

Kingda Ka is a lot of fun, and I think it’s worth the hour-long wait. I make conversation with the family in front of me, and almost get a new client in the process—but they’re looking for a wine writer, and the only thing I know about wine is that I like drinking it (but only if it’s white). I wish them luck finding the perfect writer for their wine business.

Despite being somewhat disappointed with the general unfriendliness of the staff and how old the park looks, we still have a good time, and the kids enjoy themselves. Because it’s October, the park is doing a “trick or treat trail” for the kids. They each get a bag of candy and a photo-op with some Warner Brothers characters. The children haven’t really watched any Warner Brothers cartoons, so they don’t recognize too many of the characters, but they still enjoy high fiving them and taking a picture. The characters are wearing costumes over top of their fur suits, and K-girl makes sure to tell each one “I like your costume!”

Because of the time of year, it turns out to be cheaper buying a “season pass” for each of us than getting day tickets. The season passes are valid for the  rest 2018 and for the entire 2019 season, and are accepted at all Six Flags locations. So we take our time in the park, and decide to come on both Saturday as well as Sunday. And we’ll probably be visiting the one in Texas and the one in California as well (and maybe Montreal? We’ll see).

On our second day at Six Flags Great Adventure, we took the ride into the  Safari. I have giant reservations about taking my children to the zoo, and though I have mixed feelings about safaris, I don’t mind them as much—at least the animals have room to roam in these places.

Having said that, tigers are caged here, too, and I can’t help but think that these creatures would be better off back in their natural environment, which is more often than not on a different continent. The safari also keeps linxes in small cages, and reptiles in cages smaller still. In all, I don’t get a good feeling when I see caged animals. Although they’re well fed and taken care of, it’s still unnatural to keep animals like these caged up for the benefit of people to gawk at.

Some will argue that without captivity, some animals would have been completely extinct. But this is a flawed argument: most of the animals that have been saved from extinction by captivity breeding only needed this because humans destroyed their environments. Shouldn’t we as a planet be doing more to conserve the environment for wild animals, rather than clearing land to create an artificial environment for them?

This debate has been going on for years, and it’s unlikely that it’ll ever be solved. In the meantime, we have these conversations with our children openly. We tell them why we don’t go to the zoo, and explain why safaris are better, but not the best option, either. And we try our best to teach stewardship of the earth by leading by example. We’re not perfect—far from it. But we try to do our part.

Although Six Flags Great Adventure was not the favourite park I’ve ever visited, we did enjoy the rides, and we had a fun weekend. The highlight for me was riding the Kingda Ka, and the “Blood Drums” show.

The drummers and fire dancers were very obviously having an insanely good time, and the crowd, including M-girl and me, had a blast watching them. The children also enjoyed the Medieval Times demonstration earlier in the day.

I had a nice conversation with one of the performers after asking him what region the fighting was based on. As a (super) beginner medieval sword fighter, it was interesting to see medieval sword fighters using a completely different style than what I have learned. The performer with whom I spoke admitted that the fighting style they use is loosely based on Spain, but is not historically accurate.

The skills the performers portray are nevertheless impressive, and I’m sure fighting with two swords is more difficult than fighting with one.

All in all, we had a good weekend at Six Flags Great Adventure. Still, I stand by my conviction that Canada’s Wonderland is a better park.

What is your favourite amusement park?