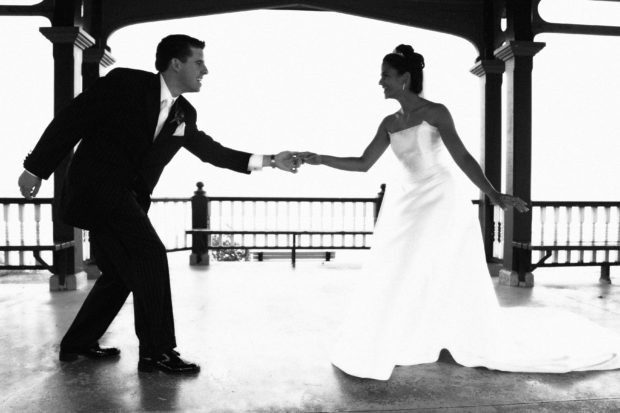 Roughly 16 years ago, I met my husband at the University of Western Ontario’s swing dance club, Swing Kids. Roughly two years before that, way back in 1999, my brother had dragged me to a swing dancing event at Chicago’s Willowbrook Ballroom (well, sort of Chicago. Close enough). I reluctantly went, sure that 1930’s dancing would be extremely boring. In my defense, I was 17 at the time, and knew absolutely nothing about swing dancing. Well, to my surprise, it was great fun, and I was hooked right away. How could you not be, when you got to take a lesson to learn how to dance and then got to dance with pretty much everyone – and to a live band, no less!

Reminiscing about my few days at Willowbrook brings a smile to my face. Unfortunately, I am so sad to report that while looking for the link to Willowbrook Ballroom, I discovered that this wonderful building, full of so many memories, was destroyed by a fire in October 2016. Many dancers are mourning the loss of such an iconic building.

At Willowbrook, I learned East Coast Swing. We didn’t dance there for a long period of time, because in 2000, my family immigrated to Canada. We moved to London, Ontario, about 2 months after immigrating, and we weren’t sure if there was any swing dancing there. My brother heard through the grapevine that there would be a live band at the University’s pub one weekend, and since that was my birthday, we decided to go. That’s when we discovered that the University had a swing dance club, and we joined it long before we were both students at the university.

In 2001, my brother excitedly told me about this awesome event that would take place in Toronto. It was called a Lindy Hop exchange, and it consisted of a full weekend of dancing, where people danced from 7:00 p.m. one night to 4 or 5:00 a.m. the next day. My brother said he was going to teach me the Lindy Hop and I was going to come with him to the exchange. So my brother taught me, and two weeks later, off I went to the Big TOE. That was Toronto’s first exchange and I have so many happy memories of that time. I was a bit intimidated seeing all the amazing dancers, but my brother taught me great connection and following skills, and I just followed. I had great fun dancing that weekend, and many times after that, too. Here’s just one of those times when we had a lot of fun dancing:

I’ve been to many exchanges, dances, and dance events in the last 17 years, and every single one was a blast. I went on a Great North American Swing Road Trip with my hubby back in 2008; we’ve met people from all over the world, and we even shared our love of swing dancing by giving an interview for a short documentary.

After having children, we dropped off the swing scene for a bit – the dances start very late at night, and paying for babysitting to go dancing every week can get pretty expensive. We still dance in our living room, but don’t really get out dancing much.

This past weekend, however, we re-lived the old days. The Queen’s Swing Dance Club (formerly the Queen’s Swing Club) has been hosting an event called “Meet in the Middle” for a couple of years. This past weekend was the 3rd year for Meet in the Middle, and some alumni got together and decided to have a QS(D)C alumni reunion in conjunction with the event. I believe our friend Brian sparked the idea, and then other alumni helped him make the plans happen.

We hosted my awesome friend, Laura, as well as her husband, who also happens to be my former housemate, and their adorable daughter, Ava, at our house. We also hosted Sylvia, who’s an old friend and was one of my bridesmaids. We met all these people through swing dancing at the QS(D)C, and it was pretty amazing to be able to catch up and have some fun together. Sylvia brought little lego sets for the kids and then helped them to put the sets together, so they really liked her 🙂 K-girl was totally enamored with Ada and played with her all weekend. We truly enjoyed hanging out with these old friends (who we’ve known for over 10 years) at our place, and the event itself was wonderful, too.

We hired our favourite babysitter, Hope, to watch the kiddos so we could enjoy the event. Hope is a former homeschooler whom we’ve known since before K-girl was born, and she’s been babysitting the kids for a while. She’s great at her job, so if you need a sitter in Kingston, let me know! Knowing the kids were in good hands, we went off to enjoy a weekend of dancing.

On Friday, we danced in Wallace Hall to a live band, The Bryan Bundrige Trio. We also met up with a lot of folks we hadn’t seen for a long while, including, oddly enough, someone we met at Western’s Swing Kids 16 years ago. Jordan’s now a professor at Queen’s. We also have another friend, Marc, who graduated after me, who’s become a professor – where does the time go? But I digress.

Tammy, Hillary, Gab, Alcina, Brian, Courtney, Kevin, Erin, Jurgen, Amanda, and Devon are just a few of the many faces we were so happy to see again after so many years. I had a great time dancing and chatting with so many wonderful people, and all the amazing dances I had made me wish I could find a way to go out dancing more frequently.

Since the dance was in the JDUC, I of course could not resist getting Mozza Sticks at the Queen’s Pub. Theses mozza sticks are the best ones in town, and the sole reason I own a Queen’s alumni card (you have to be a student or alumnus to get into the Queen’s Pub). After a great night of dancing, we came home to crash and get ready for more alumni events and dancing the next day.

On Saturday, Brian, Courtney, and a bunch of other great folks had organized an alumni meet and greet at the Grand Theatre’s Davies Lounge. It was a child-friendly event (kudos to the organizers for that!), so we got to bring our kiddos as well as meet Amanda & Devon’s and Tammy & Paul’s little ones. We had a lot of fun chatting about the old times and what we’ve all been up to.

There was also a “SWINGO” game – like bingo, but it was a swing dancing-themed ice breaker where you had to find people with certain characteristics. Whoever got a line first won. Put me in a place full of people and ask me to talk to everybody? Yep, that’s my idea of a good time (really, it is!) So it was a lot of fun to play this game, and I won a very nice, handmade-by-Courtney ribbon for completing a line first and shouting, “SWINGO!” 🙂 I also discovered some interesting facts about lots of people, too (for example, who, besides me, owns 9-year-old dance shoes and who, besides Dan and me, has been dancing for over 15 years).

After the meet and greet, we all came back home and tried to have a nap, because it was going to be a long (but awesome) night. We had dinner with all the alumni and some of their kids at the Kingston Brewing Company, and I had the most delicious portobello burger. It was so good, I’m tempted to do away with the side fries and just order two burgers next time 🙂 We had some great conversation and really enjoyed just hanging out with old friends while eating some great food.

After dinner, we all headed out to the dance at Grant Hall, where a live band, the Combo Royale, played some wonderful music to suit every taste in tempo. They did play a lot more medium-tempo stuff, so I was really happy. Even years ago when I had more energy, I was never into the really fast music, so this was super nice. I had some wonderful dances with old friends as well as new ones, and every single dance I had this weekend was a lot of fun. I also had some enjoyable conversations with some of the Queen’s Student Constables, who all agreed this was the most fun event they had ever worked as security.

After the dance in Grant Hall, Dan went home to the kiddos, but I stayed behind for the late night blues in the JDUC. There was also a tonne of food (thank you organizers!) and great conversation there, too. I had some wonderful blues dances with some amazing follows, both from the old days as well as some I had just met that night. Leading blues is so much fun and I so wish I could do it more often.

I finally caught a ride home with Hillary at about 3 a.m. We had a nice chat in the car, and I went home and fell asleep right away after an amazing weekend. I can’t wait for the next Meet in the Middle, and I hope that another alumni event will happen sooner rather than later.

Note: The photos throughout this post are from my swing dancing life, but not necessarily at the Queen’s Swing Dance Club.

Note 2: If you noticed a distinct lack of photos from the weekend I described in this post, it’s because I was having too much fun to remember to take any. Having said that, my friend Sylvia was shooting the event, and photos will be ready on her website soon. There were also other photographers there, and I look forward to seeing everyone’s shots. I don’t know the other photographer’s names/websites, so I can’t link here – if you’re one of them, please feel free to leave a link in the comments 🙂