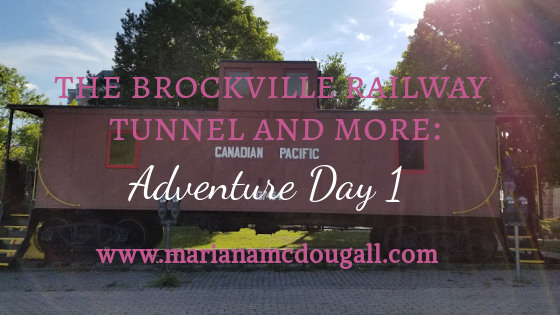 We moved out of our house officially on August 21st, and stayed at United Empire Loyalist Campground for a few days. The campground is all right, but the swimming isn’t great. The water is pretty “swampy,” and M-girl got a leech on her foot. Initially we thought it was a tick, so we used a pair of tweezers to get it out, only to realize it was actually a leech. Well, no real harm done. The campground was quite large, and there were 3 playgrounds of different sizes. We had a campfire one night and the kids enjoyed that.

The first night, Dan headed to the campground with the kids, and I stayed back in Kingston to finish pulling things off the wall and clearing out the house, as the house was being painted before the tenant moved in. I didn’t realize we’d already packed our power tools, so I took all the curtain rods off the walls manually… that took a while. But I got a good upper body workout, that’s for sure.
I finished up shortly after midnight and headed to the campground. Got there around 1:00 a.m., went around and around, and couldn’t find the campsite for the life of me. Finally called Dan, who told me to keep heading towards the water. In the dark, the little road by the water wasn’t visible, and it looked like if I kept going towards the water, I’d drive right into the lake. But it turned out that the campsite was on that little road. I finally went to sleep, and the next few days were spent running around getting final things done and saying our goodbyes.

It was nice to get a blessing from our church community before leaving. K-girl planned our Sunday (August 26th). We went to church, quickly visited a friend, played at the “orange park” (off Crossfield Ave), checked out the new Indigo store at the Cataraqui Town Centre (which is very nice), and went to the ice cream social at Robert Kiley’s campaign office opening. It was very thoughtful of him to have dairy free options, so M-girl got to enjoy some ice cream, too (dairy still triggers her eczema).
Most of my Monday was spent organizing the RV, and in the evening we had dinner with our friends the Haynes (who are moving back to Alberta, so it was nice to get together one last time). We spent Monday night on their driveway, and headed back to the West End of Kingston the next day. More running around on Tuesday, and more running around on Wednesday also. There’s a lot to do before you leave your life behind for a year (stay tuned for a checklist).
On Wednesday night we got together with Dan’s friends Ian & Mike, as well as some of his co-workers at the Red House West. It was a fun evening, and I got invited to the shooting range (and that was after telling them I’m a terrible shot, so I guess I’ll have to take them up on the offer).
On Thursday morning, we finally headed out (we had spent the previous couple of nights on Dan’s parents’ driveway). Our niece & nephew from Oshawa were spending a few days with Nana and Papa, so the kids got to play with their cousins for a few days before we left. When we left the driveway, the cousins held up a “ribbon” (which was really some toilet paper) for us to cross as we drove off. It was neat.

Before we finally left Kingston, we still had some more running around to do: dealing with the car (which was old and in need of repairs that cost more than the vehicle, so we sold it for parts), returning the license plates to Service Ontario, and buying some last minute things at Canadian Tire.
While we were in the Canadian Tire parking lot, I took the opportunity to give the kids their “farewell” gifts: Each kid got an international doll (generously given to us by one of our Buy Nothing Kingston West friends), a wooden toy car from ArtsFest, a “BoogieBoard,” a nice notebook, and a bookmark from Solar WoodCutting. We also got a tablet and two EReaders for the family to share. We had our lunch while we were parked and then finally headed out to Brockville shortly after lunch.
We met up with one of Dan’s co-workers (recently retired from Bombardier), and the kids had fun playing in their basement (which had lots of toys, since they have grandkids). We talked for a while, and a couple we had hosted a long time ago through Warm Showers also met up with us there. They recommended we check out the Brocville Railway Tunnel, so we went there with them, and it was very beautiful.

After we said our goodbyes in Brockville, we headed to Cornwall to spend the night. We parked at the WalMart and had a great night’s sleep.
Stay tuned for more updates on our journey 🙂