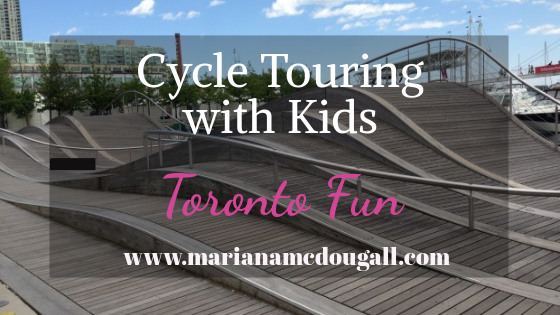 After a relaxing time at Uncle Neil and Aunt Cindy’s house, we headed out to Toronto. Because we had decided to sleep in downtown Toronto, it wasn’t possible to get a host there—at least not one capable of accommodating a family of 5 cycle tourists carrying a bunch of gear. So I bid on a hotel in downtown Toronto, as  I usually do when I need to stay at hotels. I usually use Priceline for this. We got a pretty nice hotel with a  pool and a little kitchenette, which was awesome. I unwittingly booked it in pride village, so Katia was pretty happy, since she was really into rainbows this summer.

On our way to the hotel, we noticed a tandem bike, so I had to ask to take a picture—you don’t see many tandems on the road. It was a busy intersection, so we didn’t get to talk to these folks, but it was still neat to see them on their tandem.

Before heading to the hotel, we stopped at a cute little playground, and the kids had a lot of fun (so did we).

Once we got to the hotel, we were advised not to park our bikes outside and were encouraged to bring them up to the hotel room, which had a nice but also terrifying (considering we have a 2-year-old who climbs everything) balcony. Dan had fun figuring out how to fit a tandem bicycle inside of an elevator. We were too far up to carry it up the stairs. As you can see here, the way to fit a tandem bicycle in an elevator is to do it vertically.

Once we got settled into the hotel, Dan’s brother David came to visit us. He thinks we’re totally nuts to be doing this, but there was a hint of admiration in his voice as well. He was all dressed up when he came to visit, because he came on his lunch break.

Later in the evening, my good friend April and her hubby Norm came to visit us as well. She was flabbergasted that we could fit everyone’s stuff into 4 panniers and a chariot trailer. That’s what inspired me to write the post about our gear. I also promised I’d write about what we took with us, but then I totally forgot to do it, so here’s a post about that.

Anyway! We walked around downtown Toronto and went to a supermarket. We got some yummy treats for dinner and had a bit of a feast in our hotel room. We even got to cook breakfast the next day, since we had a stove. It was pretty great.

K-girl seemed to develop a bit of a fever overnight and she wasn’t feeling great the next morning. So I stayed in the hotel room with her and let her watch some TV while I worked for a bit. Dan took the younger kiddos to the Royal Ontario Museum, and got to hang out with his brother a bit longer as well.

K-girl seemed to be feeling fine by the end of the day, so after spending an extra night at the hotel, we headed out again.

We enjoyed the “wavy boardwalk” by the Harbour Front Centre in downtown Toronto, as suggested by Uncle Dave. it was a beautiful day and there were lots of kids on the boardwalk.

The kids also enjoyed the “Purina Paws Way – Exhibits and Events for You and Your Pet.” It’s like a little information room about how they make the pet food as well as information about cats and dogs. There’s a huge cat and dog sculpture right outside, and the kids had a lot of fun looking at that.

After having fun downtown Toronto, we decided to go on our way. A guy stopped us on the road to ask us about our Bike Friday as we were heading out. Apparently he owns a bike shop and will start distributing Bike Fridays next year, so look forward to that if you’ve been on the lookout for a touring bike!

We had a good time in Toronto, and it was nice to see family and friends during our trip.

What is your favourite Toronto attraction? Let me know in the comments.