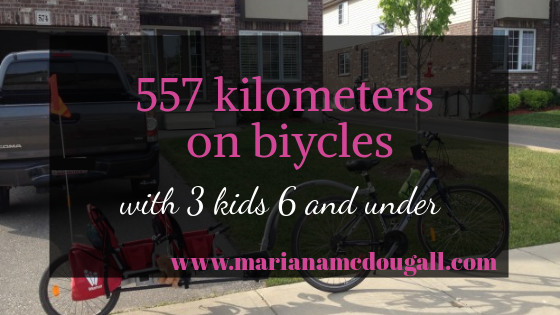 After a restful sleep on a real bed in Woodstock, we headed out to our final destination. We hit a bit of rain, but it was light enough not to be bothersome.

We noticed that we passed the part of  Woodstock that had some restaurants, but it wasn’t even 11:00 a.m. yet, so we decided to keep pedalling. We were out of food at this point, so that may have been an unwise decision. At the same time, it opened the door for one of the amazing experiences of this trip.

After we had pedalled for a while, G-boy said he had to poo! We were in the middle of nowhere, but there were a few houses here and there, so I stopped at one, where a really friendly lady came out and asked if we needed help. We asked to use the bathroom, and she welcome us in. While we were getting ready to leave, Dan asked if there was any place to eat around there. She said, “Not really… I’ll make you lunch.” So we had this lovely spaghetti lunch with this super generous girl, and we were once again so amazed at how wonderful people are if you put yourself out there in the world.

On the way to London, we stopped at a very nice playground in Beachville, home of the first recorded baseball game. The kids played and had fun, and we finally decided to get on the road again.

After we’d cycled about 7 kilometers, we noticed an OPP car with their lights on, and realized the officer was trying to get us to pull over, so we did. The officer came out of the car and nicely said “I was just wondering why your daughter doesn’t have a helmet on. I looked back to realize K-girl wasn’t wearing her helmet. “Where’s your helmet?” Was my immediate reaction, and then I realized… “you left it at the playground, didn’t you?”

K-girl had been really good at putting her own helmet on each time we got ready to get on the bikes, but this time she had forgotten, and we didn’t notice. But this police officer was super awesome and told us to hang tight as she went back and retrieved the helmet for us. We told her that we had been wearing helmets for the lest 530 kilometers… and a conversation about the trip ensued. The OPP officer said, “well, that’s more than what I’d bike, that’s for sure!”

It was so nice to have this nice officer help us out, and once our conversation was over, we got on the bikes and kept on going, finally making it to our destination in London, a bit cold, but still pretty happy.

We arrived at my cousin’s house, where the kids were pretty happy to have other kids to play with.

While we were in London, we attended my brother’s annual “Festa Junina,” hung out with my mom, dad, and stepmom, and had a good time with my cousin and his family.

It was quite the trip, and we’re hooked. We’re already dreaming up our next adventure – hopefully a longer one this time. Stay tuned.

Because Dan didn’t have enough vacation, we decided to return home by train. It was OK, but travelling by bicycle with kids is more enjoyable and even easier. More on this on a future post 🙂

And with the end of this post, I have finally finished writing out our journal posts about the cycling adventure. Only took me 7 months… I’ll do better next time; I promise! Yes, there will definitely be a next time. We don’t have a date or route yet, but we do have dreams.

Would you ever bike tour with your kids? Where would you go?

1 thought on “We made it to London! And I finally caught up on these posts!”