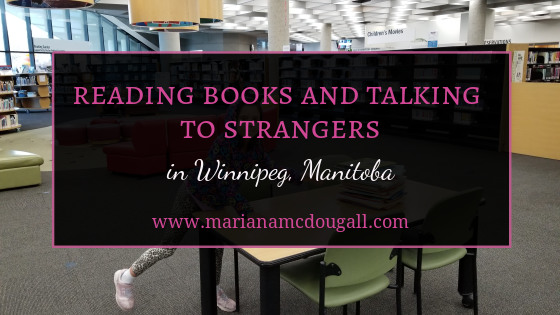 After leaving Regina, we drove towards Winnipeg, Manitoba, to visit some friends. But first, we (of course) had to stop at a library, so I could get some freelancing work done and so the kids could have a nice break from driving while they read books and played.

We stopped by the Charleswood branch of the Winnipeg Public Library. It’s a smaller branch, but had a cute children’s area and a nice table for me tow work.

We parked the RV at a church parking lot across the street, as there was no parking for a big vehicle in the little strip mall where the library is located.

I’ve always enjoyed reading aloud to the kids. I like doing all the voices and really getting into a story—I suppose for me, it’s a kind of acting, which is one of my many loves. So whenever we visit a library so I can work, I try to always read a few books to the kids before heading off to a quiet corner. I also frequently read aloud to the kids while we’re driving places (don’t worry; I’m not the one driving when I’m reading).

K-girl still likes being read to, even though she’s a voracious reader who always goes through piles of books at each library we visit (and who finishes chapter books in two days).

After enjoying the library, we headed to a Walmart to park fort he night. We checked ahead of time, and parking is allowed there. We use AllStays, but also always ask management, just to be sure.

We were going to visit our friends in the evening, so we headed to (where else?) the library to spend the day. This time, we visited the Millenium branch downtown Winnipeg, a beautiful, very large building.

We were able to find on-street parking about two blocks away from the library. You’re allowed to park for up to two hours, and you pay via the Pay by Phone app, which I’d only ever seen in Boston. After the two hours were up, we moved the vehicle to another parking spot on the same street, just a few spots down, and paid for another two hours. So we got to spend lots of time at the Millennium branch.

This library had just as much security (maybe more?) as the New York City museum we went to back in October. They check your bags and use a handheld metal detector. M-girl was quite disappointed they didn’t use it on her… go figure.

I wonder what prompted this, or if it’s just a precaution from paranoid local authorities, but it felt odd to go through a metal detector at a Canadian library. Anyway, after going through security, we found the kids’ area, which had a lot of neat displays, tonnes of books (of course), but only a few toys. The kids still enjoyed it quite a bit. After I read some stories to the kids and watched them play, I went to find myself a place to work for the rest of our time at the library.

There is a very nice-looking work area with plenty of electric outlets, but although beautiful, this area isn’t overly practical: It’s next to gigantic, floor to ceiling windows, which means that while you can sit and read a book by the light of the sun, that light also reflects off your computer screen while you’re working. Still, I enjoyed the peace and quiet and the opportunity to get some work completed in a new-to-me place. Later, we headed to a friends’ house. But before I tell you about that visit, a bit of background….

The World Has Changed

I recently saw a meme on Facebook that said,

“2005: What?? You’re meeting someone you only know from the Internet?

It’s a funny meme, because reality often has a way of being humorous.

Fast forward to 2019, and most people my age and younger (and many who are older than me) have friends from all around the world whom we’ve never met, yet consider good friends.

I have two small groups that I talk to every day through Facebook messenger: an accountability group where we check in with one another each day to state our goals and then tell each other if we’ve accomplished them, and a small group of editors where we help one another with editing questions and related topics. I’m also part of several freelance writing groups on Facebook, where I help beginning writers with questions about getting started.

I’ve never met anyone in my accountability group, but I can now say I’ve met one of my freelance writing friends and one of my editor friends, whom I’d previously only know via a computer screen. To some people, meeting up with these folks seems completely crazy. But then again, people think we’re nuts for hosting travellers in our home, too.

But the whole “stranger danger” attitude is incredibly odd in my eyes. After all, your friends were once strangers. If you refused to speak to strangers on the basis that you can’t trust them, you would never make any friends or truly get to know anyone. And why is knowing someone online considered more dangerous than knowing someone in person? Sure, it’s easier for people to hide behind a screen and make up stories about who they truly are, but personal experience has shown me that people can do that in “real life” as well.

Over the course of the years, I’ve learned that while there certainly is evil in the world, there is a lot more good than bad on this big old earth. There are incredibly generous people everywhere, if you only give them the opportunity to show their generosity. And it’s this attitude that has allowed my family and I to go on adventures, travel, and see the world while learning a great deal about varied topics.

Meeting up with New Old Friends

Our attitude towards strangers (that is, that no one is truly a stranger), allowed us to spend a lovely evening with the Omere family, whose hospitality we soaked in one wet evening in Winnipeg, Manitoba.

It was not a wet evening because it was raining; rather, the deluge of melted winter snow made the parking lot into large enough a pond for any duck that didn’t mind sharing it with the cars. We didn’t see any ducks.

We parked the RV in the parking lot of a recreation centre directly across the Omere’s apartment building and made our way to meet our new old friends. New friends because this was the first time we would meet Kelvin and his family in person; old friend because I’ve known Kelvin for four years, knew he had a wife, triplets, and a younger son, and knew that like me, he has an entrepreneurial spirit. It matters not so much what the actual business is—it’s the thrill of setting up processes that keeps us going. We were already old friends before ever meeting in person.

I know Kelvin through one of the many Facebook writing groups I frequent. Kelvin was a freelance writer before coming to Canada. Currently, he’s studying network security at university, but he’s still keeping a foot in the entrepreneurship world.

When Kelvin and his family immigrated to Canada from Nigeria, I sent him several tips about adapting to winter and snow. The Omere family has now been living in “Winterpeg” for two years, and they could now probably give me some tips on how to cope with the Great White North’s less-than-kind weather in those cold, bleak winter months.

We spent a lovely evening with the Omeres; Kelvin keeping up a lively conversation while his beautiful wife, Rosemary, interjected some agreements here and there, in a reversal of the relationship I share with my husband: Kelvin is the  talker; Rosemary prefers to listen. We talked about entrepreneurship, purchasing expired domains, SEO, writing, winter, immigration, and more over some delicious snacks Rosemary had prepared for us.

The children got along splendidly, playing and watching nature documentaries together, which also led the adults to turn the conversation to whales, polar bears, and mammals in general, and watched with intense interest to see if a mother seal would save her baby from a stalking polar bear infant. She did.

Our visit was wonderful, and I feel so blessed that I live in a world where we can make friends and share experiences over snacks and nature documentaries. While for some, meeting up with people whom you’ve only ever known via online forums may seem very odd or even “dangerous,” our world has opened up several times over with the generosity, kindness, and hospitality of those who would have remained total strangers, if it weren’t for our willingness to ignore the “common wisdom” to not open yourself up to such pursuits.

As Couchsurfing and Warm Showers hosts, we have met people from all over the world who share our love of travel and who have told us incredible stories of far-fetched adventures that inspire us to get to know this beautiful world in which live.

As travellers who are willing to trust that those we meet online will be just as wonderful in real life, our lives have been enriched by the kindness and generosity of those who choose to trust us as well.

So talk to strangers. Your life will be the richer for it.