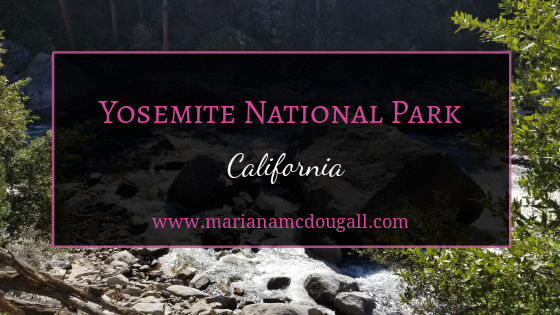 Our time in California was mostly good. We did encounter a few rude people, but I’m over it now. There’s always a jerk everywhere, but for the most part we had a good time. I especially enjoyed our time on the coast, and it makes me a little sad that we’ve decided to go inland. More on that later.

Our last big stop in California was Yosemite National Park, one of my favourite places in the world (that I’ve been to, at least).

Ten years ago, in the spring of 2008, Dan and I came here during our Great North American Swing Road Trip. I was ecstatic with the number of waterfalls at this park, and we did some incredible hiking.

Here are some pictures of our visit 10 years ago.

Our visit was a little different this time around. Firstly, we have three small kids now, and though we’ve taken them on a number of hikes and they’ve done just fine, on this day they weren’t incredibly thrilled about the hiking.

And I would have liked to have hiked a bit, but my feet are unfortunately still not fully recovered. My back has also not been happy for several months now (I really think we need a new mattress in the RV).

So we didn’t do a tonne of hiking at Yosemite when we were there. We did, however, still see many gorgeous sights.

And we did do a bit of walking among the trees, which the kids didn’t protest much about, because they were able to climb some rocks and logs—one of their favourite activities.

We didn’t see as much of the park as we did 10 years ago, but it was still a special experience to take the kids here, and I’m sure we’ll be back some day.

After Yosemite, we make our way out of California

After visiting Yosemite, we drove to Sonora, where we visited another library. The kids’ area was really cute, and the mural adorning the back wall was quite impressive.

The kids played and K-girl read a pile of books,  as usual.

Meanwhile, I found a place to get some work done. There was a lovely “quiet area” at this library, tucked into a corner at the back. I enjoyed the silence and the time to get some focused work done.

The next day was Sunday and St. Patrick’s Day, and by coincidence, the closest church to us was St. Patrick’s, so that was pretty neat. It was a lovely church and the people were very nice. The youth group was selling pretzels as a fundraiser, so we bought a few.

After church, we started making our way north, and we stopped at an absolutely gorgeous lookout near Carson Hill, California. The day had gotten a lot warmer by then, and I was ready to change out of my sweater. But not before taking a nice photo.

This lookout was so beautiful, and I’m glad we took the time for a stop.

After Carson Hill, we continued making our way to Nevada. The original plan had been to go up to British Columbia and then across, but we’ve decided to shorten the trip a little. The kids and Dan miss home, and Dan especially misses having a routine. I think he’s about done travelling at this point, so we compromised.

We’ll still drive to Alberta to see some friends, but we’re not going to B.C. this time around. This hurts my heart a little bit, especially considering that we ditched the coast to drive through this:

So much for my full year of no snow. But at least I didn’t have to shovel it, so there’s a silver lining.

While I’m disappointed that we won’t be going to British Columbia, I figured we’ve had over 6 months of travel now, and we’ve had an amazing time. If all goes well, we’ll be keeping the R.V. and hopefully doing a bit more travelling in the summers—doing some micro-adventuring with the kids.

We’ve made our way through Nevada and are now in Idaho. One day, we’ll come back to Yosemite National Park with the kids, when they’re old enough to do some more rugged hiking, and really appreciate the incredible beauty that place puts on display. And maybe, one day, we’ll visit British Columbia with them as well.