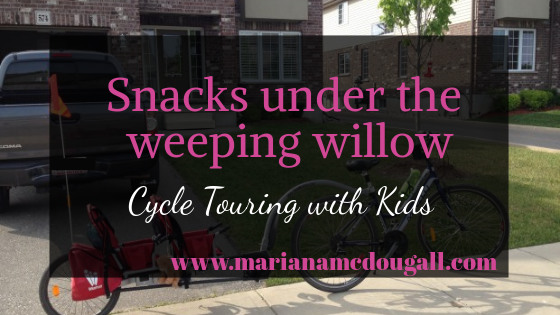 We enjoyed our ride from Brantford to Woodstock.

On the way, we stopped at a farm and asked the young guy who was working on the yard if we could stop and eat lunch on his front lawn. He said yes, and we were able to enjoy a nice meal under a gorgeous weeping willow—that’s my favourite tree, so this was really nice. We were able to use the facilities as well, which was great.

To get to Woodstock, we went through Paris, which K-girl thought was very fancy, since Paris is in France, and Fancy Nancy

thinks French is so fancy. We of course explained that this was a very different Paris. It was cute in its own right, though. We stopped in Paris to have a treat, and that was really nice, too. We had some ice cream and M-girl had some candy, since she can’t have dairy.

We got to a spot in our map where Google told us to keep going, except there was a large body of water  in the way. After some thought and asking questions, we detoured and kept going on our merry way. We hit a large section of large-grain gravel, so that slowed us down significantly. We finally did make it to  Woodstock, though, to stay with another couchsurfer. He was really nice, and had a wonderful dog, which the kids enjoyed meeting. We even got to take her for a walk later, so that was really nice.

Our host had to work that evening, so the kids watched a movie while I worked for a bit. Later we went to a nearby playground. We were almost at our destination! We had fun staying at our host’s house in Woodstock, and he’s always welcome at our place if he’s ever in K-town.