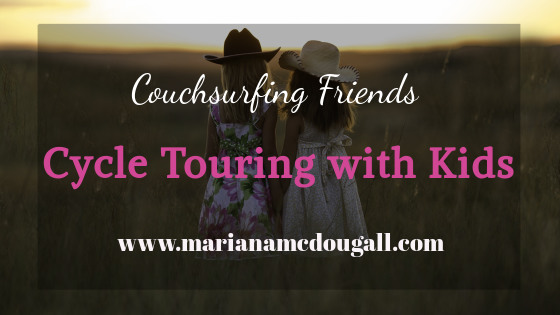 After leaving Newcastle, we made our way to Oshawa. Although Dan’s sister lives there, her house is a bit too far up from the route we were taking, so we found a host through Couchsurfing. Our host was a seasoned traveller and you can tell he loves hosting people. He spoiled us rotten with delicious home cooking, and even was kind enough to help us get some more much needed gear – I have him to thank for finally getting proper bike shorts.

Our hosts’ wife was hiking internationally at the time – they take turns doing these types of trips, and I was so glad to finally meet a couple who understands mine and Dan’s need for time off to do our own thing. It’s so off-putting how many people are either surprised or negative about us taking time off… But that’s a post for another day. Our host had a daughter around K-girl’s age, so they did lots of playing, and G-boy and M-girl were happy as well. They were really enjoying finally having a playmate (all our hosts up to this point either didn’t have children or had much older children), and they were also super happy to have lots of toys to play with. It was a blast.

Before getting to our hosts’ house, we hung out at Oshawa beach. It was really sad how dirty the beach was. It was at that beach, I believe, that we saw a neat cargo/child carry bike combination. I naturally stopped to talk to the guy, and it turns out he had imported it from Denmark at an astronomical price. So we think we’ll stick with our setup for now. But I do think we’ll get Cirque bikes when the time is right (and the bank account is fuller).

At our hosts’ house in Oshawa, not only were we spoiled with awesome food (not just a cooked dinner, but a hot breakfast, too!), we also got to sleep on actual beds. They actually had two rooms for us, and it was really nice to have all that space.

It was hard to leave such a great spot, and K-girl still asks about her friend from Oshawa. She asks if we can visit her next time we’re down, and I think we’re going to have to start making more of an effort. It was wonderful being around such giving people.

3 thoughts on “Amazing hosts – and finally, a playmate”