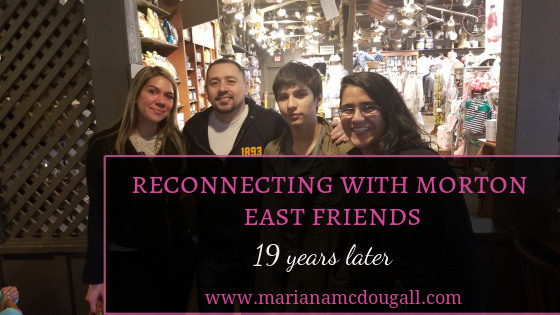 When I first arrived in Chicago in 1997, I knew exactly three phrases in English:

“My name is Mariana”

In time, I learned to understand the language and make myself understood. With more time, my heavy accent started to fade away. But those first few days and weeks in Chicago were a time of a lot of changes, all of which happened extremely quickly.

Shortly after I turned 15, I came to Chicago to spend a year while my father did part of his PhD at the Illinois Institute of Technology. The university liked his research, offered him a bursary to finish his PhD there, and four years later, we were still in Chicago. It worked out well for me—those four years happened to be my high school years, and for once, I stayed put in one school for a reasonable amount of time.

That school was J. Sterling Morton East (East for short), a beautiful, large high school that has been in operation since 1894. I was coming from a lifetime of being bullied in Brazilian schools—schools that were falling apart, smelled bad, and whose teachers didn’t seem to care about their students (and why should they, when they can barely buy groceries on their salary?)

For someone like me, stepping into the doors of Morton East and encountering teachers who cared about me felt like a gift. And it was. There was a little bullying, but I talked to one of my teachers (in my awfully broken English) and told her these girls had been making fun of me and purposely tripping me during gym. When it turned more physical, the girls were sent straight to the principal’s office, and then suspended. As they were connected with criminal activity in the district, getting suspended was a pretty bad thing on their record, and after that, no one made fun of me again.

I discovered the Bilingual Club, the Martial Arts Club, and the Poetry Club, and got involved in all kinds of after-school activities, all while attending high school full-time and working near full-time hours, too. I made all kinds of friends, some who have come and gone, and others who have stayed in touch through all these years.

There was a group of us who used to hang out together at East. Some came and went, other stuck together for the most part of junior and senior year. We used to have lunch together, had some classes together, and went to prom together—a bunch of teenagers having the time of their lives on the dance floor.

Some of us, like me and Jenny, moved far away from Chicago. but with the advent of social media, staying in touch is easier than ever.

I met up with Jenny in Texas 10 years ago, when it was just Dan and me adventuring across Canada and the US. We saw her during this trip as well, when we passed through Texas. But Carlos, Aimee and I had not seen each other in 19 years, so our get-together was a little emotional (especially for the girls).

Hugs, laughter and tears as old Chicago friends get together after 19 years

I see Carlos from the back, as he’s telling the seating hostess how many people are coming to the restaurant. I give him a giant hug from behind, and it feels like we’re in high school again.

Aimee arrives later, and the tears arrive with her. A couple almost escape from me, but I’m to ecstatic to let them last long. We have delicious, unhealthy deep-fried food, and it’s perfect. Within minutes, we’re talking just like we did back in the day, though the topic of conversations has obviously changed.

Aimee has a 15-year-old son who joins us for dinner, and Carlos has a little boy who’s two. We talk about parenting, births, high school memories, jobs we’ve had, challenges we’ve faced, and I don’t want the conversation to end. I’m so incredibly happy in this moment, and I hope we can keep visiting for a while.

The Naperville Cracker Barrel was a wonderful place to meet and catch up with old friends. It wasn’t busy on the Tuesday night, our server was all smiles and very friendly, and we felt really at home chatting like teenagers.

After dinner, we show Aimee, Javy (her son) and Carlos the RV, and we chat some more. It’s been so incredibly wonderful to meet up with my friends again, and I really do hope we can meet again next year—20 years after our high school graduation.

Cracker Barrel allows overnight RV stays, so after dinner, we boondocked before heading to Chicago, where we revisited some places that bring back a lot of memories. More on that in the next post, so stay tuned.