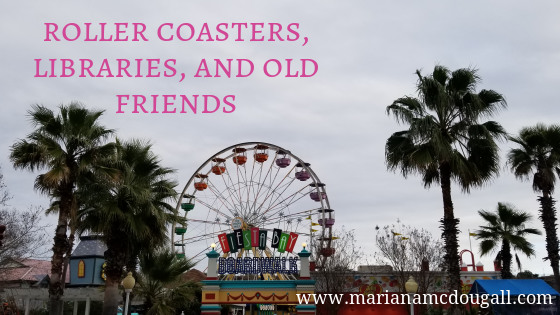 After a great time at Padre Island, we started making our way back to San Antonio. We wanted to take the kiddos to Six Flags Fiesta Texas one more time, and we also wanted to stop in Austin and see some old friends from the Queen’s Swing Dance Club.

We took the kids to the amusement park on Saturday and again on Sunday, after mass at the beautiful St. Francis of Assisi church, just north of San Antonio. Before we headed to the park, we joined the parishioners for “Social Sunday,” and we met some very nice people who were really interested in hearing about our adventures. After Social Sunday we headed back to Six Flags.

I love amusement parks, and my adrenaline-loving ways have apparently been passed on to the next generation. M-girl, only 4, rode Pandemonium five times in one day, and was disappointed she wasn’t quite tall enough to ride the bigger roller coasters.

Despite her love of thrill rides, she can still appreciate the smaller kiddie rides too, driving the train and making a new friend along the way.

G-boy and K-girl insisted on riding the Iron Rattler again, even though G-boy said it was “too crazy” the last time he rode it. But he was ready, and he not only enjoyed his second time riding the coaster, he rode it again, and insisted on the front row this time.

And then they rode it again—four times in a single visit. Dan doesn’t mind roller coasters, but apparently, they’re “not his favourite,” and the Iron Rattler’s drop was a bit much. So I went back to the roller coaster with the older kids, and Dan took M-girl to what he thought would be the kiddie rides. She insisted on riding the Pandemonium. Twice.

We had a wonderful time at Six Flags, meeting Looney Tune characters and going on fun rides together. We stayed  all the way ’till the park closed, and it was a great day. I’m really glad we bought the season pass way back in New Jersey; I’m having a lot of fun hitting up all these different amusement parks. It’s reminding me of that project I want to do one day… ride all the tallest roller coasters in a bunch of different parks around the world. One day…

After a great day at the amusement park, we returned to the church, where the priest said we were welcome to park for the night.

The next day, we headed back to Austin. The kids read a tonne of books and did their schoolwork while I worked on some freelance articles.

After the library, we visited some friends from Queen’s and had an enjoyable evening eating pizza, talking about women in science, and playing old school games on a big screen TV. We had a great time, and now we’ll be heading west towards New Mexico (but not before checking out some more of Texas’ great state parks).