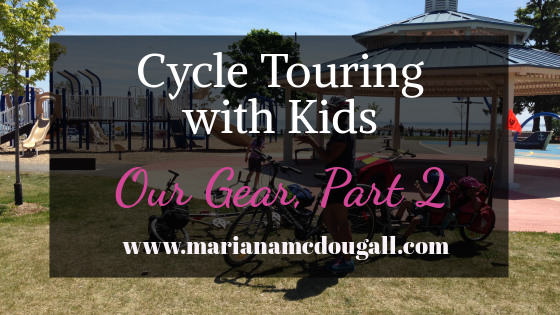 So eons ago, I had promised I’d write a post about what we carried with us on our cycle tour. I did talk about our gear, as well as the camping stuff we brought along, but I never did write that post about what exactly was in those saddle bags. Well, better late than never, I say!

I did forget to mention, in the post about what we packed in the chariot trailer, that I brought my laptop with me. Whereas for some, this may seem a bit ridiculous on a cycling trip, I am a writer, and we didn’t own an iPad. So bringing the laptop was sort of a must. When we go on our next cycle tour, I’m hoping to have an iPad, but I’m still going to be getting a keyboard for it. I can’t really type on a screen… maybe I’m a dinosaur, but in the grand scheme of things, it’s not that much extra weight. I brought the laptop in the laptop backpack, and I also had some journals in the pack as well.

In the panniers, we packed clothing for all of us, as well as my medications. I have asthma, hypothyroidism, and my allergies cause pretty severe post nasal drip, so I use a sinus rinse bottle and also have a prescription nose spray. I had a ziplock bag with my daily inhaler, the nose spray, the sinus rinse bottle with the packets, and my toiletries (toothbrush, deodorant, etc).

We carried about 3 tops and 2 bottoms for each person, but we did pack 5 pairs of underwear and 5 pairs of socks for everyone. We had one nice outfit for each of us (for church, etc.), and finally, we carried our bathing suits and one towel that we shared amongst ourselves. We had an insulated lunch bag that we bought in Picton, but we ended up getting rid of it, as we didn’t really use it.

I’m sure I’m forgetting some stuff we brought, but generally, that was about it. We were able to do laundry every few days, either at people’s houses or at hotels/motels, so it worked well to have just a few items of clothing.

On our next tour, I don’t think we’ll be changing much about what we carried, although the packing methods may change a bit. Having said that, although it’s a lot of extra weight, I was really happy with having the chariot instead of just panniers for the camping gear and food. It made life a lot easier, especially since we had young kids with us. It was so nice to just stick things in the trailer and be on our way – I have a feeling it would take a lot longer to pack up if we had to stick everything inside small panniers. I do believe we’ll take a chariot on the next tour as well.

What do you take on long cycling trips?