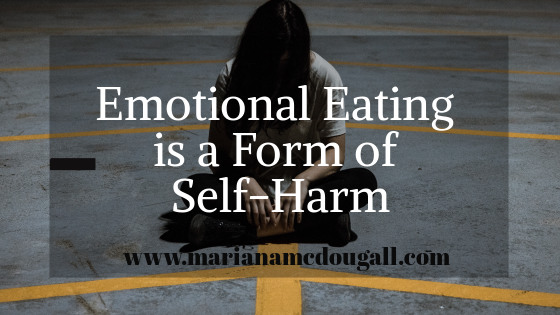 We overeat because we don’t like ourselves. At least not in that moment, when we stuff our faces, hoping the food will somehow erase the ugly thoughts swirling around in our heads.

I reach for another sour cream ‘n onion chip. I realize my hand’s near the bottom of the bag. And it’s only been 5 minutes since I left the store.

In quick succession, I’ve drunk an entire can of Kickstart, a whole bar of Dairy Milk chocolate, and a family-sized bag of Lay’s potato chips. And it’s funny… right now, in this moment, I don’t feel bad about it. I know I shouldn’t be eating this crap, but at this point, it no longer matters. Who cares about a few extra pounds? A higher cholesterol reading? An early heart attack?

I’m sure the caffeine isn’t helping with the anxiety,  but again, who cares? It doesn’t matter. The fact I’m crying when I eat the potato chips doesn’t stop me from eating them. I just keep eating. I can’t help but wonder, in this moment, if I’m just doing this to prove others right.

“I don’t have it together.”

“I do stupid things.”

“I don’t care about anybody but myself.”

All things, which, in one way or another, seem to have been said to me lately… just not in so many words.

I recently went through a very stressful time, with a medical emergency in my family. I was the most vulnerable I’ve ever been—and I’ve been vulnerable many times. My rock, the one person who “gets me,” who understands, who knows every deep, dark secret. I could have lost that person, just like that.

It’s hard not to, when it’s spat in your face like that. You start questioning yourself. Maybe they’re right. And then, shortly after that, I was accused of being a cunning liar. And again, you start questioning if you did anything wrong. And you start looking for what’s wrong with you. Or shutting up those thoughts with food.

It’s not a conscious thing, half the time. I don’t sit there going, “I’d like to stuff my face full of unhealthy things to deal (or not deal) with my emotions.” It’s automatic.  It’s a stop at the local small corner store under the guise of supporting local business. It’s the mindless grabbing of processed brownies as I check out at the grocery store. It’s the mindless eating, which I never admit at the time, but that I do to stop thinking about other things.

For those few minutes that I’m stuffing my face, I can just think  about the taste I enjoy, or so I try to convince myself. But the truth is, I don’t feel good for a single minute while I’m doing it. And that’s why this is self-harm: eating your way to an unhealthful life. Punishing yourself for all the things others blame you for.

And I can just see the comments coming: “you don’t have to believe what people say.” “It’s in your power to stop those thoughts.” “No one can make  you feel inferior without your consent.” All true, I know. But also, a tonne of BS, too.

It enables bullies and abusers. If the only person responsible for their feelings are the recipients of awful words, that’s all the license bullies and abusers need to say whatever they want. Because for them, there are no consequences.

Like Hanna Baker said, “everything affects everything.*” And it does. Your words have consequences. And while you have free speech, that doesn’t mean that you should throw other people’s feelings in the trash. Free speech does not mean you get a free pass from the consequences of what you say.

Free speech does not mean that you should completely disregard other people’s feelings. A little compassion can go a long way to improve communications and help people stop the cycle of emotional eating. The cycle of self-harm.

I’m currently 180 lbs. This is the heaviest I’ve ever been, outside of pregnancy and up to 6 months post-partum. And I know exactly why I’ve gained weight.

I don’t exercise. I stuff my face. I turn to food to deal with emotional issues that feel to heavy to bear. And I tell myself, at least it’s not drugs. At least I’m not cutting myself. It’s just food. But it’s not. It’s not just food. Every one of those chips, everyone of those bites when I’m not hungry, when I’m looking for an  escape… they’re me telling myself I’m not good enough. That I’m not enough.

And that needs to end. Now.

If you also struggle with emotional eating, I want you to make me a promise.  Right now.

The next time you pick up that piece of food, you’re going to remember: your’e harming yourself. The people who hurt you, the events in your life that have led you to this moment… what you’re doing to yourself right now, it won’t change anything. Except you. It’ll change you. And not in a good way. These actions, all they’re doing is harming you. You’re adding to the pain by choosing to harm yourself. Stop.

If you promise me you’ll stop, I’ll stop, too. We can help each other. We can get through this. In much healthier ways. Emotional eating as self-harm can unfortunately open the door to a lot more hurt, and potentially to other, more serious self-harm down the road. Don’t do it. Try to hug the kid inside you who’s begging for love, rather than feeding it another potato chip. Learn to see past the ugly thoughts in your head.

There’s help out there.  Here are some resources for those of us who struggle with emotional eating. Don’t worry, I’ll use them too.

Here is an excellent article from Help Guide explaining what emotional eating is, how to recognize it—and how to stop it: Emotional Eating: How to Recognize and Stop Emotional and Stress Eating

This post from the Canadian Mental Health Association, Ontario Chapter lists several national organizations that can help you overcome emotional or binge eating.

The International Association of Eating Disorders Professionals Foundation (IAEDP) has a searchable database  where you can find eating disorders professionals, including dietitians who specialize in binge eating. Simply enter your city and country and hit search.

There are also several books on the market that deal with learning mindful eating, some of which touch on emotional eating and how to help yourself through the healing process. Be careful, however, to choose reading materials that help you learn to love yourself.

Personally, I feel that any “diet” books or dieting processes can do much more  harm than good for those of us who struggle with emotional eating. Getting help for the emotional part and learning to love yourself as you are… these things need to happen before attempting to make any changes to your body (more on this in a future post).

Please, please. Use the comments to get a conversation started about emotional eating as self-harm. Or self-harm in general. Let’s keep the conversation going. Not because a phone company wants more publicity. But because we can help each other out of this rut.

* For anyone who might care, I’m quoting Hanna Baker in the book 13 Reasons Why, which I have read. I have not watched the TV show, neither do I think it’s necessarily healthy for people struggling with mental health issues to do so. There are varying opinions on this topic, and countless articles and blog posts about it. This one is interesting, if you’re so inclined to read it.