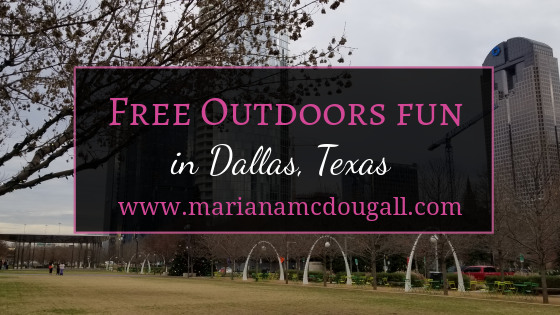 As  the Christmas hymn plays, the water accompanies the rises and falls in the melody.

The water sprays rise higher with each note, until, at the crescendo, a jet unexpectedly and powerfully turns on, shooting water almost as high as the very tall cross, the centerpiece of the fountain. As the song fades to its end, so the water returns to a low spray, mesmerizing the kids and other passersby who have not seen the fountain’s majesty before.

But for Dallas residents, it’s just another day, as they pass by on their rented, city-owned motorized scooters, or rush to catch the bus or train.

There are lots of free fun to be had in Dallas, but it’s worth paying for public transportation. For $9 (Maya doesn’t pay), the 5 of us were able to park the RV and ride the DART into Dallas, which made things really convenient for us. There’s no charge for the parking (as far as we could tell).

The ride was long (40 minutes), but we entertained ourselves with the books we had packed into our backpacks. I suppose we were behaving ourselves splendidly, because an officer that had boarded the train said, “what wonderful children,” and asked if he could make them junior officers for the day. So each kid got a “junior officer” sticker from the Dallas Police, and they were thrilled.

We interspersed our reading with looking at the beautiful bridges and buildings on the way into the city, so the ride didn’t feel as long.

After disembarking at St. Paul station, we were greeted with a 3D map of the city, which delighted the children. They pointed out all the buildings they thought they had seen from the train, and we mapped out our route to Klyde Warren Park.

It’s on our walk to the park that we encounter the most massive church any of us have ever laid eyes on. I’m initially confused as to whether this is a church or some other building, especially since the signs around it refer to the buildings as “the campus.” I have to chuckle to myself when I read the sign that says “no backpacks on campus.” It seems like such an odd sentence, because when I think “campus,” I think “school, and when I think school, I think backpacks. After looking around some more, it becomes clearer that these giant buildings are in fact, all part of a single church.

The First Baptist Church in Dallas takes up two full blocks (and then some). On one side of the street, the old church can be seen. Attached to the church is a new, modern, gigantic and beautiful building that wraps around the adjacent block.

Across the street stands a “family center”—also a church building, which takes up the entire block on which it sits. And in between these two massive buildings sits the large fountain, which provides entertainment galore for the kids. At one point, M-girl, all starry-eyed, tells me “this is a dream come true!” I wasn’t aware that my 4-year-old dreamed about giant fountains, but I’m happy that she’s enjoying herself. After the children have had their fill of the water show, they go see the nativity scene.

K-girl explains the representations of St. Joseph, Mother Mary, baby Jesus, and the three wise men to her brother and sister, and they spend some time looking at the details on the statues.

We finally start making our way to the park again, and once we get there, the children head straight for the children’s playground, and have a tonne of fun.

The Klyde Warren Park is fairly new (it was built in 2009), and it’s privately managed and operated (though owned by the City of Dallas). The Office of James Burnett did a wonderful job designing the park, and it’s clear the Woodall Rodgers Park Foundation takes pride in the recreation opportunities provided there.

The children’s playground is lovely, with well-maintained equipment, and even a “story tree,” to whose top the children delight in climbing.

But the fun doesn’t stop there: much like in New York, you can borrow games to play in the park, and there’s no charge. All you need to do is leave your ID while you play the games. So the children and I play giant jenga while Dan looks through a magazine borrowed from the park library. After jenga, we borrow “The Very Hungry Caterpillar Game,” which we all think is a little too advanced for the age group suggested on the box. So instead of playing the full game, we just put the butterfly puzzles together.

In addition to the board games, you can also borrow lawn games, ping pong paddles and balls, and foosballs, too—all to be played outdoors on sturdy equipment. We borrow the bowling game, and the kids have a lot of fun chasing the wooden ball after trying to knock down the pins. We had lots of room to run around, and a tonne of free things to keep us entertained at this beautifully laid out spot.

The park has all sorts of convenient facilities, free entertainment, and it’s super clean, too. In the Children’s Playground, there are accessible, unisex bathrooms with plenty of space and a change table, while there are gendered bathrooms on the other side of the park. There’s a family stage and an off-leash, fenced dog area for your furry friends.There’s tonnes of green space for running around, having a picnic, or playing the lawn games that you can borrow from the “games room.” And finally, there’s also a lovely small restaurant in the park, with nice outdoor furniture where you can enjoy some food while watching big screen TVs.

The park has been festively decorated with a very tall Christmas tree and giant ornaments, and as it starts getting dark, the trees are all aglow with Christmas lights. There are also beautiful, permanent light fixtures overhead in nice arches that adorn the paths.

The park offers a large array of free activities such as music in the park, fitness classes, story hour for the children, and more. To see a full list of events, you can visit the gorgeous park website here. If you’re in Dallas, I highly recommend visiting this park. You could spend all day here and never run out of things to do. It’s a beautiful spot and probably even nicer on a warmer day.

As we make our way out of this wonderful spot, the girls notice a wall of ribbons near the sidewalk. We ask the lady who’s sitting at the table in front of it what the wall is, and she says that it’s a remembrance wall. It’s really hard for those who have lost loved ones during the holidays, so you’re invited to write the name of a loved one on a ribbon and tie it to the wire wall. So we write some names together, and we have a conversation about our funny ways of dealing (or not dealing) with grief in the West.

After a wonderful day in Dallas, we take the train back to the DART parking lot, where we are able to spend the night before heading towards The  Colony to meet up with a dear high school friend the next day. After that, we’ll head to Arlington, where we’ll be taking the children to Holiday in the Park at Six Flags Over Texas.

Have you ever been to Texas? What’s your favourite thing about this state?