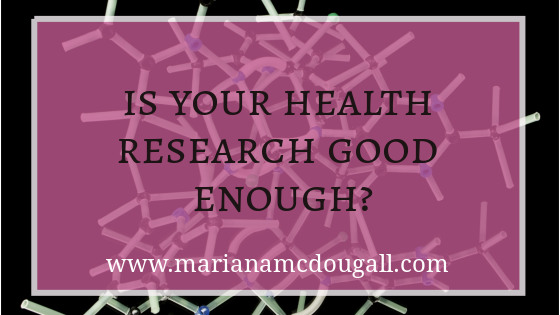 This easy access to information is both a blessing and a curse.

Anyone can find information nowadays, but not everyone is taught how to differentiate good information from misinformation and false histories and news. “Do your research” has now come to mean “type something into Google and justify what you already believe with blog posts and badly quoted journal articles.”

Before I wised up and understood that most people really aren’t interested in having their beliefs challenged or having an intelligent conversation about differing viewpoints, I tried to educate online. From blog posts defending my position (oops; still doing that), to replies on other blogs and social media pointing out misguided “information,” I did it all. I finally realized it wasn’t worth my time when I wrote a long blog post, with scientific references, and was met with exclamations of “You need to do your research!” accompanied by a long list of blog posts that countered what I had written. Sigh.

If you’re going to tell someone to do their research, be sure yours is up to par with that suggestion. Here are a few hints on how to do proper research.

Someone’s opinion or anecdotal story doesn’t count as scientific research. To be sure, anecdotal evidence has its place, but it can’t be used to support blanket statements about what will and will not work. Also, if you’re going to look for information about something, be sure to not only look for information that already supports your beliefs. Read about more than one viewpoint before making an educated decision about what is.

2. Not everything you read on the Internet (or anywhere, really), is true.

I once visited a naturopath, out of curiosity. I quickly discovered that this “doctor’s” approach was to recommend the same diet for everyone of her patients, regardless of clinical presentation. This diet was based on a single book claiming that a common protein is the root of many health evils. I won’t name names, but suffice it to say that this book has been debunked again and again by historical accounts, archaeological research, and scientific nutrition studies.

Just because a book was written about something doesn’t mean that that something is an absolute truth. And if said book recommends one diet or one exercise for every single body on the planet, be sure to throw it into your “opinion,” rather than fact, file. The human body is far too complex, and human lives and health conditions far too varied for one way of life to suit every single body.

Here’s a simple question that should help you separate fact from fiction when it comes to one diet being suggested for everybody: should those who live in the Northernmost part of the planet have the same diet as those who live in tropical countries? Why or why not? Let that question guide you.

Magazine article authors and bloggers love to cite one or two studies that “prove” their point. The truth is, any scientist worth their salt will tell you that one study doesn’t prove anything, and even many studies don’t prove much, either.

Scientific evidence depends on studies being replicated several times over to form, over many years, what’s called scientific consensus. What this means is that based on the evidence over several years, scientists form an unified opinion about a subject. So, if the last 30 years of research suggest that smoking cigarettes leads to lung cancer, and one study comes out saying that smoking can actually be good for you, you better believe the older studies until that latest study can be replicated for 30 years. This whole smoking example is far-fetched and off-the-wall, but just replace this with high fat diets and heart disease to get my point.

4. There are good and bad studies.

A study of 10 people that “proves” something… that kind of thing does not exist. When people quote these kinds of studies, they conveniently forget to add that the conclusion to such articles call for more research before final conclusions can be drawn, and that 10 people is not a large enough sample size to draw any real conclusions.

5. Correlation does not equal causation.

Even when studies find a link between two things, scientists are careful to word this link as a “correlation.” There *may* be a link, but this does not mean that one thing causes the other. This alone should warn you to be weary of any written account that says that “this thing is proven to cause this other thing.”

6. There are good and bad health practitioners (just as any other professionals).

May people start distrusting health practitioners, be they doctors or dietitians, because of a bad experience with the health system. I know it can be discouraging when your health providers don’t listen to you or don’t help you to find some answers.

It can also be frustrating when you’re offered a band-aid solution, and the root cause of your symptoms isn’t investigated. Trust me; I understand—I’ve been there. But just because you’ve had a few bad experiences, doesn’t negate the experience and knowledge of every single person in that profession.

A lot of “health nuts” love to bad-mouth dietitians, but the reality is that dietitians have studied for several years about nutrition, completed strict internships, and actually have to answer to somebody if they give bad advice to patients.

And contrary to popular belief, the job of a dietitian isn’t to give you a food pyramid or food guide pamphlet and call it a day. For several people with chronic illnesses, listening to a dietitian can literally be a matter of life and death. The same goes for doctors. Yes, there are bad doctors out there. But the majority of doctors are actually interested in helping you achieve your best health. Don’t mistrust every single doctor because of some bad ones.

How do you make sure your information is solid, prior to forming an opinion?