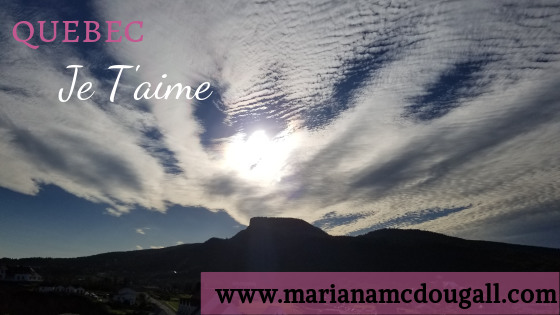 I incorrectly said in a previous post that we had spent the evening of Tuesday, September 4th, 2018 in Percé. We actually spent that night in Riviére-au-Renard. After a lovely sleep with a gorgeous free view, we headed out to Forillon National Park.

Before signing in to a site at the park, we stopped at Camp Bon Ami beach. It was a gorgeous view, and the kids had fun collecting more neat rocks. We all put on our rain boots, because it was pretty chilly, but we still wanted to walk in the water. K-girl had fun playing “tag” with the waves, and M-girl got a little too close and got a boot full of water, but we all still had a grand time.

Once we arrived at Forillon, we decided to purchase the Discovery Pass, as we’ll be going to quite a few national parks and historic sites. The National Parks worker gave the kids activity booklets that were pretty awesome, and we incorporated them into our homeschooling for the next 2 days. What better way to learn about nature than to explore it?

The activity booklets encourage the kids to explore the woods and to ask questions of national parks workers if they’re having a hard time finding the answers. Unfortunately, the one given to G-boy was a bit advanced for him, but we helped him through it. When they finish their booklets, they get a little souvenir from the park, which was neat. Daniel cooked a delicious dinner outside, and we all enjoyed a campfire together. Life is good.

I’ve been enjoying my morning walks. It was raining and a little chilly on Thursday, which is why I’m thankful I brought my rain gear and bought myself rain boots for this trip. I’m also thankful for the knee braces I was prescribed, which help me to continue walking without having my knees give out from under me. That’s a long story, but suffice it to say I’m glad to have the tools that allow me to continue to be active and enjoy the trip.

On Thursday we enjoyed the outdoors with the kids, and helped them with their new “explorer” books from National parks Canada. The kids also did some seat work back at the RV, and then went for a hike with Daniel while I worked and did laundry at the campsite. We left for Percé later in the afternoon, and checked out some of the historic buildings. It was getting dark, so we decided to head to a campground for the evening. We stayed at Camping Percé, a lovely small campground with some amazing views.

On Friday I went for my usual morning walk and was rewarded with 7 blue herons very close by. By the time I took the picture, they had flown a little further away. I enjoyed the grounds and the nearby town.

We decided to go back into Percé to take in the historic buildings in a little more depth. They’ve recreated the village of Percé as it was in the 1900s. There’s a naval base, a store, a blacksmith’s shop, a tavern, and more. Each of the buildings has several plaques explaining the history of the area, and each building has interactive monitors that allow kids and adults alike to explore the building while finding objects in a fun game, as well as historic photos to peruse.

Speaking of games, there’s also  a life-size version of Battleship that you can play for one hour for $5.00, and the game is based on actual battles that took place here.

M-girl had fun learning to tie knots at one of the buildings. I’m embarassed to say that If spent 7 years in the Navy, yet have forgotten how to tie pretty much all those knots. Maya didn’t do a bad job for a 4-year-old, though.

At some of the buildings, there are people dressed in period clothing who will tell you about the history of the area, in both English and French.

The buildings are free to visit, but donations are encouraged at little boxes at the entrance to each. We took our time visiting Percé, climbing the hill to the lookout for Percé Rock. I tried to take a picture of Dan with the kids, which I think embodies what it’s like to long-term travel with young kids: a little crazy, somewhat disorganized, but everyone’s still smiling at the end of the day.

We also visited an old movie set for La Maison du Pêcheur. The buildings were closed to the public at this time, but plenty of plaques indicated the history the movie was based on. We are learning a whole lot of history that we were unaware of (or had forgotten). It’s been great for the kids to learn history and geography, and we’re pleased to see that the indigenous people of Canada and their sacrifices at the time of settlement have been recognized in each of the historic places we have visited. We settled for the night at Camping Côte Surprise, a very nice campground.

In the morning I went for my walk, and went through the village or Percé, which was lovely. The village is very pretty, there’s an awesome playground, and there were cool moose sculptures, though that’s as far as the moose sightings have gone so far.

After leaving the campground, we stopped at a beach to walk through the water in our boots, and the kids were yet again mesmerized by the different types of rocks.

The sky was absolutely gorgeous.

We also stopped at a couple of super cool playgrounds.

We ended our time in Quebec with a stop at Cantine Clé de Sol in Neuvelle. Dan & the girls enjoyed some poutine, G-boy had  a cheeseburger and fries, and I enjoyed some fish and chips (that I shared with M-girl as well). The food was delicious and the service was great. We had a nice conversation with an older couple that was sitting across the room from us (the restaurant is that small).

We settled for the night at the Walmart in Atholville.

On Sunday, the kids played for a bit, and M-girl insisted on finding out where the “big Canada’s Wonderland” was, so I pulled out the map.

“The Big Canada’s Wonderland” is Six Flags Great Adventure in New Jersey, where the tallest roller coaster is located (but not for long). M-girl is super excited to go to another amusement park after her experience at Wonderland. The kid loves roller coasters, and I can’t blame her 🙂

We went to St. Thomas Aquinas church in Campbelton for mass, and got a blessing from the priest for out travels. The greeter was very friendly and interested in our travels. The kids played at a playground nearby both before and after mass, and had a really good time.

We are having a blast on the trip so far, and all of us are learning a tonne of Canadian history, and getting the chance to learn from the world around us, be it physically constructed or the beautiful nature our country contains.