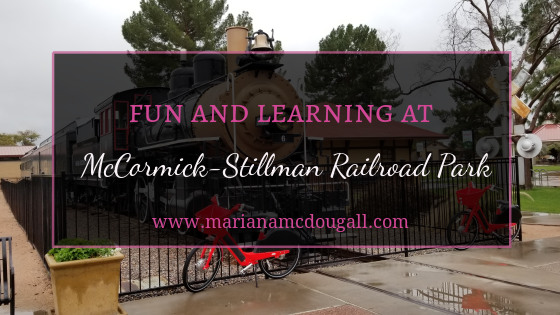 The fair is tiny, but perfect, and M-girl delights in pressing the button that makes it come to life. Further down, dinosaurs roam among orange trees, and even further, a perfect Lego city has been settled around the railroad tracks. In yet another display, several Spidermen ride on top of a train, while another perches on the tunnel through which the same train passes.

The displays may be in miniature, but the collective is massive. There are model trains of every kind, and every imaginable combination of cities, parks, beaches, industrial lands, and more around each of the many tracks. Four clubs come together in the Model Railroad building at the McCormick-Stillman Railroad Park in Scottsdale, Arizona.

The building is full of interesting details, but perhaps my favourite thing of all is the train that has burst through the wall and is about to fall off an unfinished track.

The building is free to enter, but they do accept donations. There are other free attractions at the park, including two very nice playgrounds. Despite the rain, we all enjoyed ourselves very much. There is plenty to see and do at this park; some attractions are free, and others are very reasonably priced. I enjoyed everything we did here, but the model railroad displays were truly incredible.

The railroad models aren’t the only impressive feats of miniature-making in this park—plenty of miniature houses are on display as well, and each has a level of detail that would take days to really observe fully. Nevertheless, we still enjoy looking at each house on display. There is a library, a cottage, a hotel, and even Buckingham Palace in miniature.

In addition to observing these amazing crafts, we also learn a little more about World War II—which we have been doing a lot of during this trip. I was unfamiliar with the story of the “Merci Train,” and it was really interesting to see the Arizona car and some gifts on display here.

In short, after World War II ended, France was hurting for medical supplies and food. Reporter Drew Pearson made their plight known and suggested the idea of the “friendship train,” which would send supplies to Europe. US Citizens mobilized to send train cars full of supplies across the Atlantic.

After receiving these supplies, the people of France, despite not having much, sent gifts of thanks via their own train back to the U.S. This was the “Merci Train,” and contained gifts of various kinds, from small toys to the military medals of fallen loved ones. In addition to the car itself, which is on display under a ramada in the park, you can also see some of the gifts at the museum in the park. Children 13 and under enter the museum free of charge, and adults pay 1 ticket each—each ticket costs $2.

There is lots to do at this park, and we enjoyed ourselves fully. You can certainly make this a completely free outing, if you just come to enjoy the beautiful playgrounds and admire the model railroad and miniature house displays. But at $20 for all 5 of us, we think it’s worth “shelling out” for the whole experience. This includes entrance to the museum for the adults (kids 13 and under get in free with a paying adult),riding the merry-go-round and the little train that goes all around the park.

Scottsdale, Arizona, is a lovely city, and though we only visited the railroad park, it was worth the stop. Have you ever been to Scottsdale? What’s your favourite thing to do there?