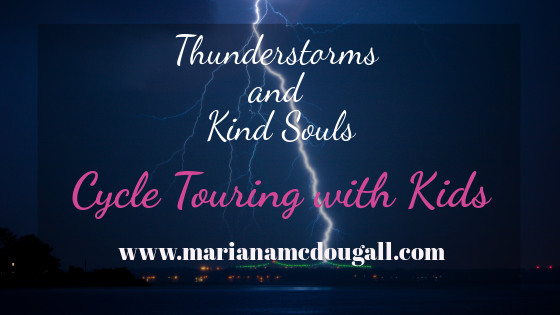 I spent some time this past week writing down everything (or most things) I could remember from our cycling trip this spring. Get ready for an onslaught of posts from what seems like an event a lifetime ago (but it’s really been only 7 months. Better late than never with the posts, I guess.)

It seems a bit ridiculous that I’m writing blog posts about a trip we took last summer, and it’s the end of January. But I really want to share our awesome experience, and I figure it’s better late than never.

So I’m going to continue writing about our cycling trip before the whole thing escapes my memory, because, in typical Mariana fashion, I lost the journal I had kept during our trip. So I better get it all down now, before I forget it all. Here goes!

After leaving Oshawa (which was hard to leave, after our host had spoiled us rotten), we headed to Mississauga, where we were going to spend the night at one of Dan’s uncle’s houses. We found an absolutely awesome lakefront playground in Pickering. It was pretty neat for the kids to be able to sit in swings and have fun while looking at gorgeous lake Ontario. They also took the opportunity to make “sand angels.”

The Beachfront Park had a pretty nice boardwalk and a very nice playground, and we all had a good time. We also met some friendly dogs.

After we had played for a while, we headed out again, finding more nice beaches along the way. The weather that morning was not calling for rain; however, looking up we noticed some pretty dark clouds, and decided it was about time to get going.

So we packed up and got on our way, but we didn’t make it all the way to our destination before it started raining. The kids were getting cold, and the rain was getting heavier. I told Dan we should ask someone to let us in to their house.

Dan says, “Who?” And I respond, “Anyone who’s got their lights on!” Within less than a minute of that exchange, I noticed a house with the lights on, and I could see an older couple through the window. I rang the doorbell and asked if they’d let us in for a little while, just until the rain let up. They were really wonderful. They let us in, gave us water and towels, and talked to us about our trip.

We were very thankful during this trip to have kind souls who helped us out when we needed a hand. This couple is just one of many examples.

Once the rain let up and we were a bit more comfortable, we headed out again. We made it a bit further, but then it started raining again. Not only raining, but thundering, too! I counted the time between the lightning and the thunder, and it sounded like we weren’t too far from the storm. There was really nowhere to stop, so we just biked as fast as we could toward Uncle Neil and Aunt Cindy’s house, and we finally made it. The kids were pretty miserable by this point, but Aunt Cindy’s nice offer of a snack and a warm bath made everything all right again. We also got to see Darlene (one of Dan’s cousins) and her awesome dog, Kronos.

We ended up staying at Uncle Neil’s a bit longer than we had planned, because M-girl had a huge nap, and we really didn’t feel like waking her up, after the ordeal the night before. There were books and crayons to distract the kids, so we had a nice time just hanging out at the house.

It was a good visit.